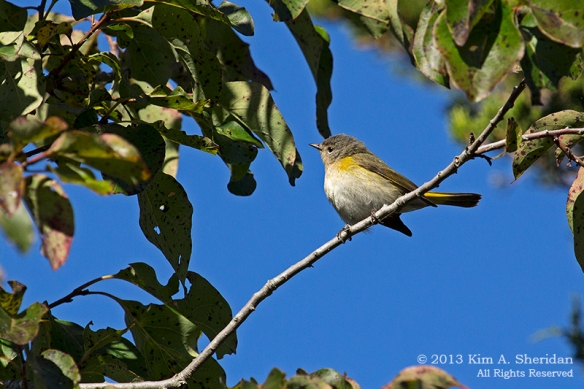 Imagine that you’re a Warbler, like the American Redstart above. You weigh just a few ounces. You’ve spent a short, frenzied summer raising a brood of hungry nestlings. Or maybe you’re one of those recently fledged young birds. Now that the weather is cooling and food becoming scarce, your biological clock is driving you to make the long flight south, hundreds or even thousands of miles. You want to stay over land wherever possible, but here you are with water pressing in from both sides: the Atlantic Ocean to your left and the Delaware Bay to your right and in front. Soon or later you will have to cross Delaware Bay. But you’ve been flying all night (to avoid predators) and right now you’re hungry and tired. What do you do? 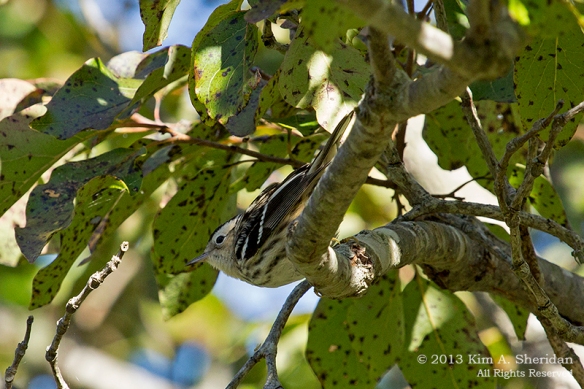 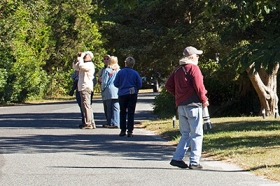 Look! Here are all these nice food-laden trees just below. An all-you-can-eat buffet! Never mind the crowd of birders and photographers standing on people’s front lawns to watch your every move. On this day in September, for you and dozens of your warbler compatriots, Cape May Point, NJ is the place to be. Black-and-White Warbler, above.

Simple geography makes Cape May County a migrant trap – a hotspot for winged creatures migrating south in the fall. Birds by the thousands follow land as far as they can, and the geography funnels them all over Cape May Point. Before crossing the water, many hungry birds must come down to rest and eat. Black-throated Blue Warbler, above.

Photographing you tiny warblers is a challenge. If you’d only stop moving! Add to that the challenge of identification. In fall you’re out of the more obvious breeding plumages, plus there are juveniles mixed in, who look different from their parents. I’m not really up to par yet on naming these birds, and so rely heavily on more experienced birders. When all else fails, I fall back on my photos and the field guides. Cape May Warbler (above) – I think. 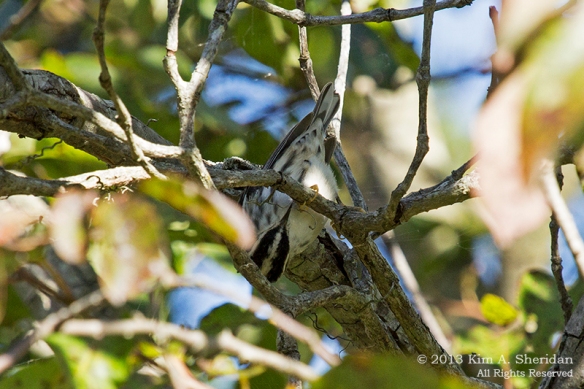 Are you this flexible? Black-and-White Warbler again, leaving no food tidbit unturned.

Warblers show up in other places, too. Palm Warbler, Ocean City.

FUN FACT: A tiny Blackpoll Warbler needs to double its weight to fly from New England to South America each year. In human terms, that means a 150 pound person would need to gain 15 pounds a day until they reached 300 pounds!

It’s not just warblers on the move in the fall. Imagine you’re a raptor, soaring on the thermals over Cape May Point. Bald Eagles, Kestrels, Red-tailed Hawks and more join you in the sky; Northern Harriers hunt over the marsh.  See that wooden platform filled with people? That’s the Cape May Hawk Watch, and the people are there just to watch you migrate. They keep score, too!

The Osprey above was lingering at Tuckahoe WMA before departing for warmer winter digs.

You might be one of the shorebirds, waders, gulls and terns that are fueling up to move south. Here a few fish try to evade a hungry Laughing Gull at Corson’s Inlet SP.

Is this prehistoric looking bird a friend of yours? Glossy Ibis, South Cape May Meadows. 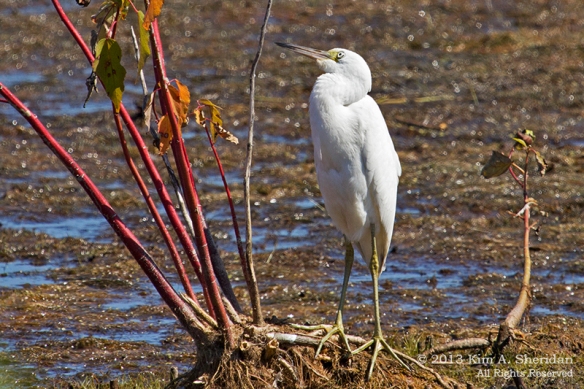 Ho, hum, not another Egret? Actually, no. This is a juvenile Little Blue Heron. Mature adults are a dark dusky blue, but the juveniles are white, and look a lot like Egrets. Cape May Point SP.

Perhaps you are a dainty Forster’s Tern, flying slowly, head down, looking for prey. There it is! A sudden dive straight down, and you’ve got lunch. Edwin B. Forsythe NWR.

Well-fed and rested, you’re ready to continue your journey south. But you’ll have company; after all, birds aren’t the only winged creatures migrating in the fall.

Coming up: Migration Meanderings: The Flight of Kings