A “Big Day” in bird-watching parlance is a day when a group of birders try to see as many different species of birds as they can. Recently, I had a different kind of Big Day.

I saw six new birds in ONE day, that’s how. My BIG DAY.

But do I have photographic evidence? No!

Murphy’s Law of Bird Photography: Go out, camera in hand, in search of stunning photographs of the brightly colored migratory warblers that appear like magic every May, and either:

a) there are no birds, or

b) there are plenty of birds, but they are moving so rapidly deep in the dark treetops that all of your images are rubbish.

Like this Common Yellowthroat, so buried in the foliage that its light underparts look green from the reflection of the leaves.

Common Yellowthroats, as their name implies, are pretty common. One hopped across my porch while I was reading one evening. I enjoy seeing them each year, but this was not a new species, a “life bird”, for me. 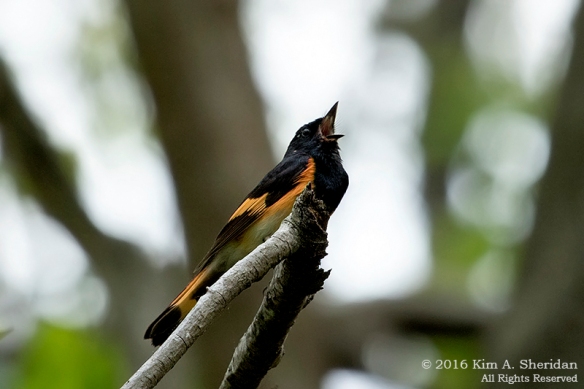 Here’s a bird in the open, an American Redstart. Great bird, horribly distracting background, too bright. Another common warbler I’ve seen before this year.

John Heinz National Wildlife Refuge is a hotspot for migrating warblers, flycatchers, vireos and other birds in the spring. Many of the local birders said this was the best spring migration we’d had in some years.

Murphy’s Law of Bird Photography, Corollary #1: Go birding WITHOUT the camera, and the birds will sit in the open in beautiful light, singing their hearts out.

See the above incident on the porch. Great bird, really close, no camera.

Here’s the one life bird I saw this spring I managed to capture, a Cape May Warbler. I first saw it the day before at eye level, in the sun, singing away. But, alas, no camera. I found it again the next day with camera in hand; this time it was hidden in the trees. I finally caught it in a blur of motion. This nicely illustrates one of the habits that make warblers so difficult to photograph: they never stay still!

Here’s that ubiquitous Yellow Warbler. Notice how all of my images are of the birds’ tummies? Another warbler habit: Most species like to hang out high in the trees. To see many of them you need to tilt your head way, way back. There’s a reason warbler fans complain of “Warbler Neck.” Most of my images are of birds that hang out a little lower in the canopy.

For those curious to know, my new birds this May were the Blue-winged, Cape May, Wilson’s, Blackpoll, Chestnut-sided and Canada Warblers and the Northern Parula. All but the Blue-winged seen in one day.

Murphy’s Law of Bird Photography, Corollary #3: Have a bird pose in the open for you to photograph, and that’s the bird that might have been a lifer, but you’ll never know for sure what it was. 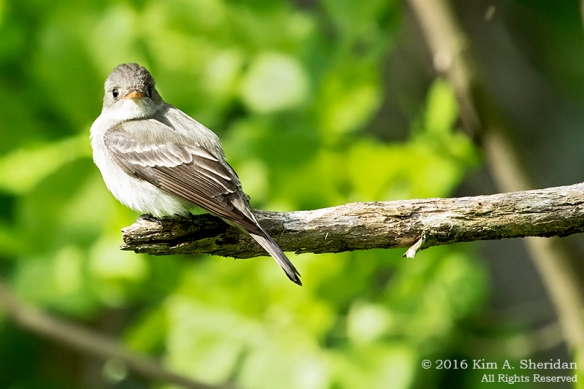 I was with one of the Refuge’s finest birders, and she wasn’t willing to say definitively which flycatcher this was without hearing it sing. Despite posing for a long time in the open, it never opened its mouth.

There are other birds at the Refuge that are easier to see and photograph.

Baltimore Orioles are stunning at this time of year. 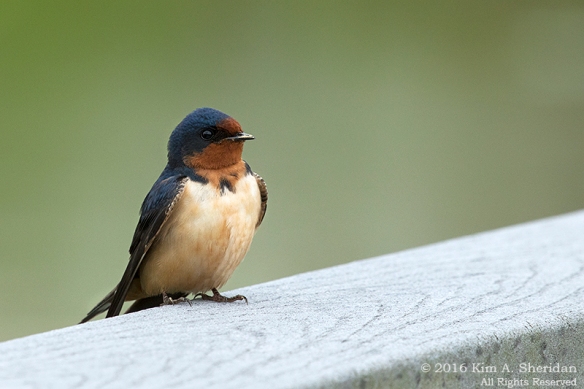 Barn Swallows are everywhere. Trying to capture them in flight is nearly impossible. But they’re not shy when they’re sitting on the boardwalk railing. 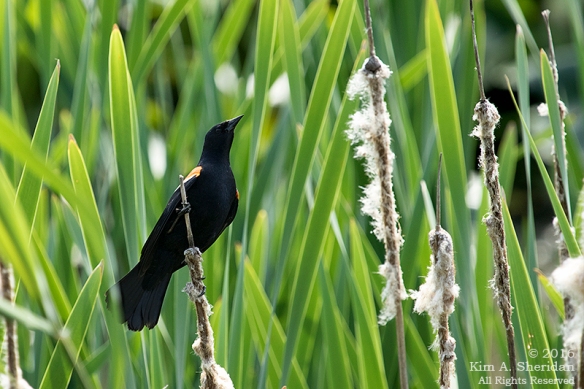 Red-winged Blackbirds are another common bird that I keep hoping to capture in flight. Sitting among the cattails will have to do.

Speaking of common birds in flight at the Refuge, that’s a Great Blue Heron at the top of this post. 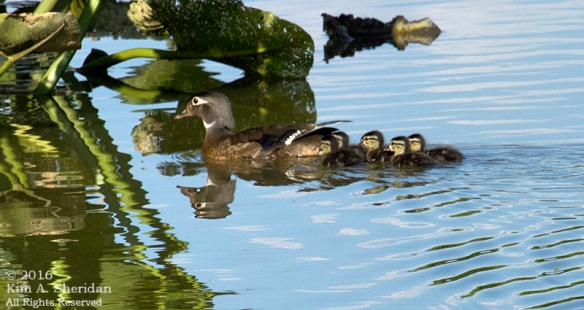 I’ve been trying to photograph male Wood Ducks in their elaborate breeding plumage for a long time, not particularly successfully. I’ll take the ducklings any day of the week, though. They’re hot on Mama’s tail as she paddles for the safety of the spatterdock.

Every day’s a Big Day for Mama Wood Duck.

Every day that I am outside observing and enjoying Nature is a Big Day for me.