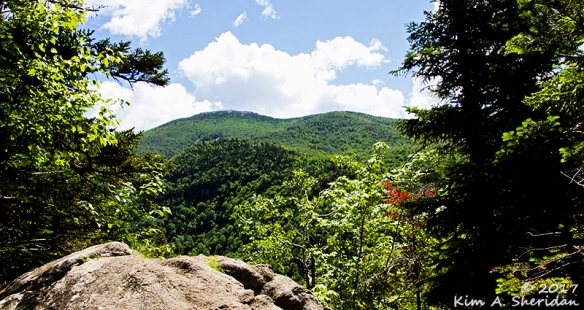 The mountains are calling and I must go. – John Muir

It wasn’t all leisurely repose during our Adirondack retreat. There was serious mountain climbing to do. As close as we were to the High Peaks of the Adirondacks region, we couldn’t skip doing a little peak bagging of our own. But which peak?

There are 46 High Peaks in the Adirondacks, all 4000’ high or more. Many of the trails to reach their summits were too long and steep for us to tackle in a moderate day hike. Something in the 3-4 mile range was more our speed. I’d acquired a book called “Best Easy Day Hikes in the Adirondacks.”  From that we chose a hike to Balanced Rock on Pitchoff Mountain. 2.5 miles, 775’ elevation gain, with a neat rock formation on an exposed bedrock ridge as the payoff. The guidebook described it as the “perfect first hike for kids…” What could go wrong?

Much of the land in Adirondack Park is designated as wilderness. No powered vehicles are allowed. Pitchoff Mountain, in the Sentinel Range Wilderness Area, would be our first foray into the wilderness. The wilderness areas may be lacking in cars, but that’s because they’re all jammed into trailhead pullouts. Our trailhead was on Route 73, across from Cascade Mountain and upper and Lower Cascade Lakes. We parked precariously along the side of the road, climbed a short steep set of steps, and plunged into the deep, shady woods.

If you’re not the lead horse, the view never changes. Don and Robb walking up the hill. The trail started right off with a good stiff incline, and already I was wondering what we’d gotten ourselves into.

After a bit, the trail leveled out, and became a nice walk in the woods. Birches and hemlocks predominated, amongst other trees. The forest floor was peppered with mushrooms.

This is an amanita mushroom, beautiful, but hallucinogenic and poisonous. I’m sure that doesn’t bother the tiny wood sprites that must shelter from the rain under Mother Nature’s umbrellas.

Lycopodiums were everywhere. Sometimes called ground pines, these tiny plants look like little Christmas trees, but they’re actually a club moss. We’re quite fond of them, and get excited every time we find them in a new place.

There were so many Lycopodiums that our excitement wore off after a thousand or so.

Another surprise was finding trilliums, some just past bloom. In our neck of the woods, trilliums are spring ephemeral wildflowers that bloom in late April and early May, after which time the foliage withers and dies away. Seeing them still in leaf in early July was a treat. A few still had old flowers.

We passed some rocks on the side of the trail that led to a nice view. Back in the dark depths of the forest, rocks became more numerous and prominent. We really like to scramble over boulders and slabs, so we didn’t mind. Pitched up at a 45° angle, this terraced outcropping offered a fun trail bed.

…another view. This is Cascade Mountain. With its sheer cliff faces, it’s a favorite place for rock climbers. Cascade Lake lies far below.

Then the trouble started. It had been an easy walk this far. Until we found ourselves confronted by this, which I later dubbed “The Fractured Staircase.” Perhaps 30’ high, with no way around it. To the right is steep rock face, to the left an impenetrable thicket. No way to go but straight up the middle. 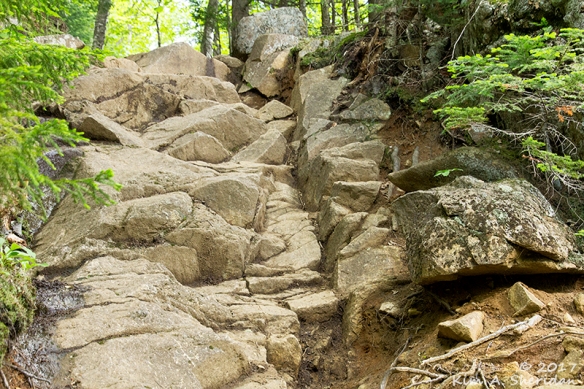 Not a problem for Robb, who’s part billy goat. The first step gave me fits. It was so tall I had to put my knee on it and pull myself up. The rest of the climb was accomplished carefully with hands, knees and feet. I felt a deep sense of accomplishment upon reaching the top.

I also felt out of breath, and would have welcomed a brief rest. But we quickly moved on to the next rocky challenge, and the next. In between the rocky spots, the path grew wet and mucky. These sections had to be negotiated as carefully as the rocks; get too much mud on your boots, and you’d slip dangerously scrambling over boulders.

Along the trail, I heard a rustling in the brush to my left. I looked down just in time to spot a large snake, with strongly contrasting light and dark patches. Before I could react, it slithered out of view. I like to imagine it was a timber rattlesnake, though I never did identify it.

The rock scrambles grew tougher and steeper. We began to wonder what kind of parent would consider this a “kid-friendly” hike. If I had trouble with some of these tall rocks, how could kids with short little legs manage?

Hopes began to rise when the trail dipped a little – right into a bog. We had to pick our way along fallen logs and stones to avoid getting wet boot soles.

On the other side, we saw something that stopped us dead in our tracks. The mountainside didn’t go straight up, but it was darn close. Rock surfaces and boulders everywhere we looked. Oh, dear.

(Full disclosure: This is a composite image of two photos that were never meant to be combined. It looks a little odd, but still gives a sense of the size of the rocky hillside.)

We like rocks, but this was ridiculous. It appeared that the trail to Balanced Rock went straight up the rock face. Kid-friendly?

Robb’s a big kid, and he bounded up a few feet to pose valiantly for the camera. Taking pictures gave me a chance to catch my breath for a minute.

There was plenty to photograph looking the other direction. Cascade Mountain. Those cliffs were even steeper than what we were facing.

Down the face of Cascade streams a slender waterfall, plunging hundreds of feet into Cascade Lake.

This was the waterfall that distracted me so driving past that first night.

The top of Cascade is wide open bedrock. Topped by peak baggers.

Wide open bedrock is what we’d climbed all this way to see – the open rock and boulder formations at Balanced Rock, covered with wildflowers, lichens and blueberries. The view of the summit of Pitchoff Mountain itself beyond Balanced Rock, and the surrounding High Peaks, is said to be amazing.

But now we were faced with an obstacle too much for Don and I to surmount. We’d been hiking long enough to get tired, though we’d not gone more than a mile. I might have been able to continue after a break, but I knew we’d have to come back down that same rock face. For us, this was the point of no return.

Back down the mountain we went.

Never let it be said going down a mountain is easy. It’s not; at times I find it more difficult than going up. I was relieved when we came to the Fractured Staircase, knowing it was the last of the truly challenging bits.

This is looking down from the top. Kid-friendly? I don’t know about that, but I took my cue from the younger set – and slid down on the seat of my pants. That’s a favorite technique of mine when confronted with a steep hillside. I figure it’s a lot farther to fall from a standing position than a sitting one.

I was deeply disappointed to fall short of our goal. Even more, I feel we missed something spectacular at Balanced Rock. But with time, I’ve come to see it not as a big challenge I failed, but a series of smaller challenges I met and actually enjoyed.  Don’s always saying it’s about the journey, not the destination. This time, the mountain and the forest were destination enough.

It is not the mountain we conquer but ourselves. – Sir Edmund Hillary