Still in a thankful mood, my friends and I took an overnight trip on Thanksgiving weekend to explore someplace new. We piled into the car and headed two hours south, to the Eastern Shore of Maryland. 28,000 acres of mixed hardwood and pine forests, tidal marsh and freshwater wetlands awaited us at Blackwater National Wildlife Refuge.

Blackwater is known for migrating waterfowl, Delmarva Fox Squirrels, and lots of Bald Eagles. We had high hopes of seeing lots of wildlife. The first thing we did upon arrival was check out the Visitor Center. It’s a beautiful one, airy and light-filled, with a nice little gift shop. Then we set out on the Wildlife Drive, a 4½ mile road that skirts ponds, marshes, woods and fields. 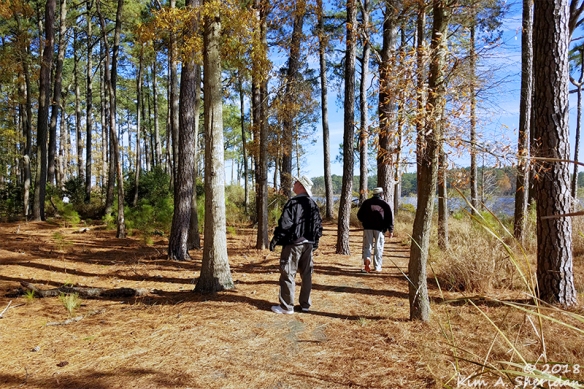 The opportunity to take a walk presented itself early on, and we were quick to take advantage of it. Robb and Don marveled at the strange loblolly pines in the mixed oak and pine forest on the Marsh Edge Trail. 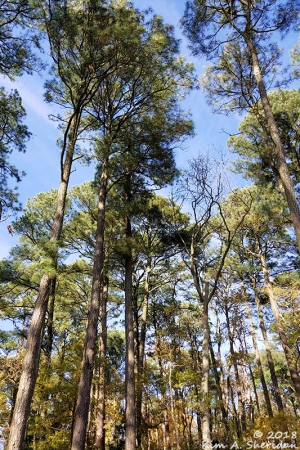 Loblollies towered above us everywhere.

The Eastern Shore is the northern limit of the loblolly pine, a southern tree that prefers acidic soil in lowland and swampy areas.

Needles come in bundles of three, and they are remarkably long, at least in comparison to the pitch pines and white pines we are used to.

Young loblolly saplings look like a soft fuzzy hedge. These are ten to twelve feet tall.

Loblollies are a fast-growing tree and will reach heights of 100’.

Ok, I admit it; I just like saying the word “loblolly.”

The seeds of the loblolly pine are an important food source for the endangered Delmarva fox squirrel that lives here. We spotted a couple of these large squirrels later in our trip, but they declined to pose for a photograph.

These two aren’t so shy. Don and Robb, in front of the marsh and a stand of loblollies. On this trip, we learned a new marsh plant, the Olney three-square bulrush. True to its name, it has three sides. It’s an important food for waterfowl and muskrats, whose lodges peppered the marshes.

The first part of the Wildlife Drive was mostly open fields and woods, and Canada Geese predominated. The second half of the drive wound between the Blackwater River to the left, and large pools to the right, and yielded a richer variety of birdlife.

Ducks and geese filled the marshy pools. All was peaceful, if noisy, until the birds took off. Large flocks of Northern Pintails and Mallards and – oh look! Snow Geese! They flew this way and that, crisscrossing in a confused tangle of birds.

More Snow Geese. Now, just what would cause all these happily feeding ducks and geese to suddenly take to the air?

Bald Eagles appearing in twos were a theme all Thanksgiving weekend. This duo thoroughly spooked the waterfowl. 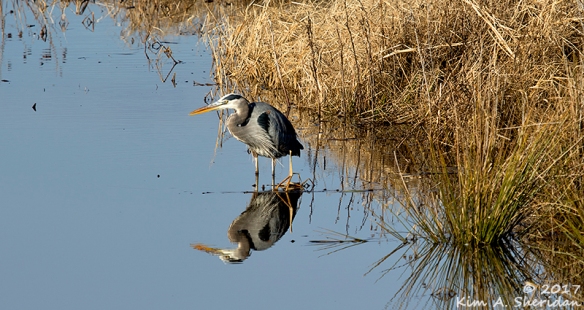 Serenity reigned a little further down the road as a Great Blue Heron admired his reflection.

Northern Pintails were another motif of the weekend. These dapper ducks are both males.

Pintails floating amidst the colors of autumn. A delicious seafood dinner. A spectacular sunset over the Chesapeake Bay. The perfect ending to our first day at Blackwater NWR.

What will the morrow bring?