Expectations are a funny thing. Go into an experience expecting great things, and you’re frequently disappointed. A location sure to yield amazing birds instead gives you Mallards at point-blank range, while the flock of Avocets feeds three football fields away. The stunning 360° views from the highest point east of the Mississippi are completely obscured by thick fog and driving rain.

On the other hand, it’s when you expect nothing that you are often pleasantly surprised. A fussy old mansion turns out to be surrounded by acres of stunning landscapes. The search for a humble lunch spot surprises with an amazing cavern hitherto unheard of.

Who was right, and who was wrong?

As it turned out, we were all wrong, in many ways, which you shall see as this series unfolds.

Upon arrival in Catskill Park, we went directly to the Visitor Center, as we always do. Catskill Park, like Adirondack Park, is a mix of state and private land; acres of Wild Forest and Wilderness interspersed with homes, businesses and towns. The Visitor Center is near Mt. Tremper, on the shores of Esopus Creek. 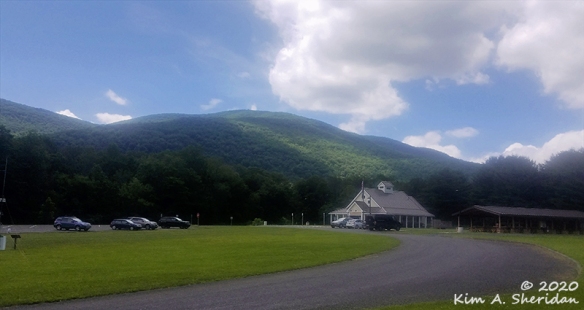 Here’s my very first photo of the Catskills, from the Visitor Center parking lot. Why does it look like it was taken in a steamy shower? Because it was, in a way – the high humidity fogged up my cell phone’s lens. Gives it a dreamy, ethereal effect, no? Since it was the only shot of our first stop in the Catskills, it will have to do.

Notice the wide flat valley of Esopus Creek, with gentle hills rising in the distance. About what I expected.

We began to get the lay of the land on our drive to our rental house in the Catskill High Peaks District. High peaks in the Catskills means anything above 3500’. The ridges run roughly northwest to southeast before joining a north-south ridge in the east known as the Escarpment. Beyond the Escarpment the land drops abruptly to the wide Hudson Valley.

I was pleasantly surprised by the scenery. Those aren’t little hills, folks – those are real mountains.

Except that they aren’t. The Catskill Mountains are not mountains! At least, many knowledgeable people don’t consider them to be, since they are not the result of tectonic collision. Instead the Catskills are a dissected plateau. 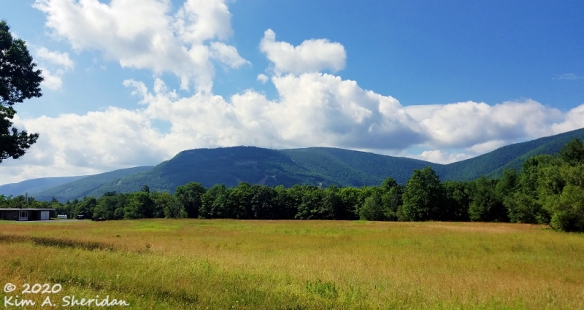 The Catskills were formed as an ancient river delta, pushed upward to a vast flat plateau and carved by rivers and glacial melt over several ice ages into a dramatic escarpment, craggy peaks and deep valleys and cloves.

Along the road, out of the corner of our eyes, we spied an unusual building, the step-child of a log cabin and an Orthodox church, perched on a hillside. Definitely unexpected.

“STOP! Turn in, turn in!” came the chorus, and I skidded into a side road on two wheels. 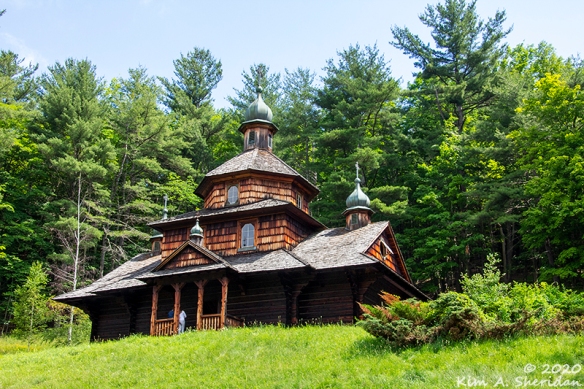 And that’s how we found St. John the Baptist Ukrainian Catholic Church. A woman who saw us admiring the church encouraged us to take photos, told us a little of its history, and invited us to Sunday services the next day.

Hmm. You know Don won’t be able to resist that!

After unpacking, we hit the road, looking for supper. This is the view from an intersection near our house. Mountains. More rural than I was expecting. 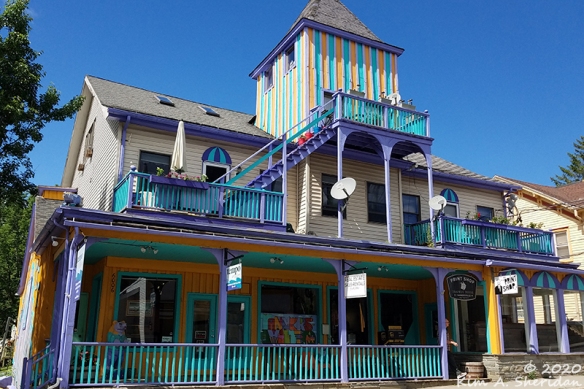 Tannersville is a small town with just a few eateries and shops along the main road. Many of the buildings are colorfully painted. Definitely not the string of kitschy tourist shops I imagined. 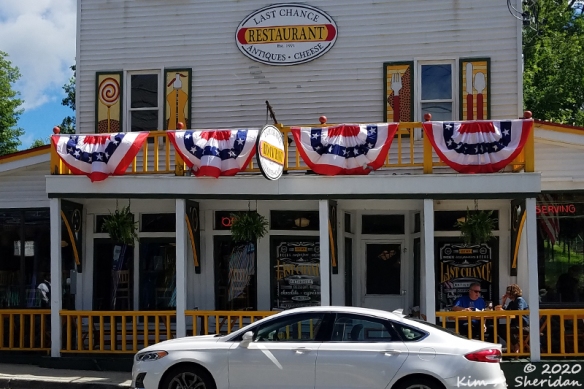 Ah, the Last Chance Restaurant. Just what we need! Really quaint eatery with great bison burgers and the best black cherry soda ever.

I don’t know what I expected from our first full day in the Catskills, but it surely wasn’t Don and Robb pounding on my door at 5 AM just to tell me “There’s NO WATER!” The well pump had failed. No washing hands, no showers, no toilets. Welcome to rural living, kids.

While Robb waited at the house for them, I drove Don to church. He was keen to see what a Ukrainian Mass would be like. Would it be in Ukrainian? (Yes.) There are no pews inside. Do people stand through the service? (Yes.) 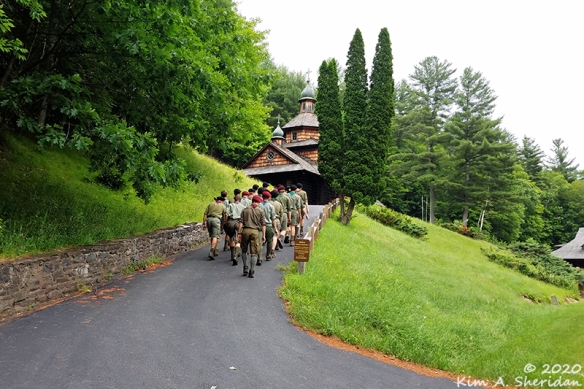 A troop of Ukrainian Scouts attended mass. We learned that there is a sizable population of Ukrainian immigrants in the area, and the Scouts spend the summer nearby.

Confession: I used the restroom in the church hall, just to be able to wash my hands and flush the toilet!

Across the road from the church.

Back at the house, the well crew had reeled in the broken pump from 500’ below ground and replaced it with a new pump. Problem solved! A bit of a miracle on a Sunday morning. Guess Don going to church worked. VERY unexpected! 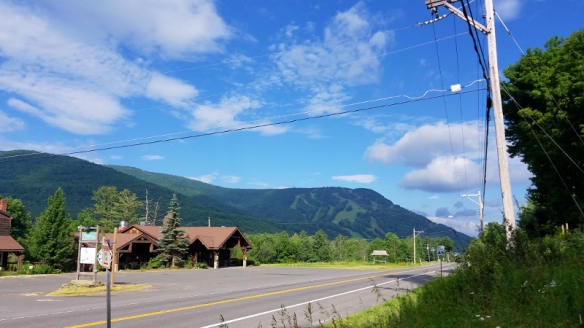 With just the afternoon left, we decided to go to Hunter Mountain, a big ski resort. The ski trails, as seen from the road.

Ski resorts were new to Don and me, we weren’t sure what we’d find. Especially in the off-season. There was some activity, though; the ski lift was running and folks could ride up and down. Plus there’s a zip-lining course. That was unexpected.

There are two ways to get to the top of Hunter Mountain – the ski lift, or by foot. The trails to the summit climb more than 1,700’ in 7 or more miles. At the top of the ski lift is a statue of Rip Van Winkle. Alas, the statue will have to wait for us for another time. 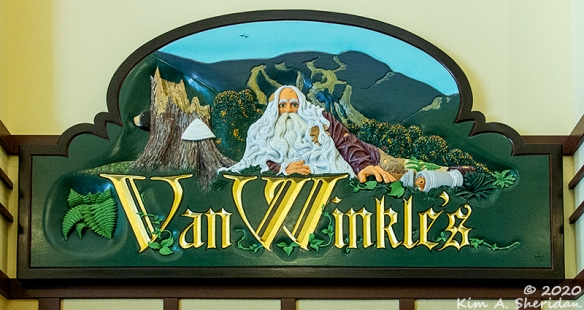 Rip is a legend in these parts. Washington Irving’s famous short story takes place in the Catskills. Rip comes upon some strangely dressed gents playing nine-pins in the mountains. He drinks their liquor and falls fast asleep. He wakes up to find twenty years – and the American Revolution – has passed.

We would encounter Rip Van Winkle on a daily basis throughout the week. Probably the only thing that didn’t surprise us in the unexpected Catskills.