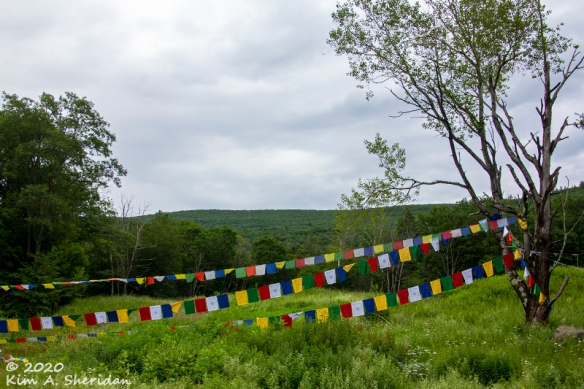 A vampire, a monk and the Devil walk into a bar…

The requirements for a fun hike are many: parking and rest rooms, a path that is neither too steep nor too long. With a payoff – waterfalls, a great view, fantastic rock outcroppings, weird plants… Before my friends and I came to the Catskill Mountains, I read through two trail guides, and found a few hikes that fit the bill.

Then Don announced that we were doing a hike that I hadn’t even considered because of its difficulty rating – the 4.6-mile strenuous hike up Overlook Mountain. 1380’ of elevation gain in 2.3 miles, via an old carriage road lined with power lines; no views or payoffs until the top where there’s the ruins of Overlook Mountain House, a view, and a fire tower.

I was critical (which I regret; sorry, Don!) Too critical, I guess, because he refused to tell me what got him interested in this hike in the first place. I should have known there was a reason, there’s a reason for everything Don does. But what could it be?

It was only at the trailhead that Don related a story he’d read about a hero of the Seneca tribe and the terrified Indian maiden he came across one night.

This Overlook Mountain, she said, was infested with vampires, who nightly pursued them to suck their blood.

Of course it is. That explained a lot. Okay, let’s go find us some vampires!

There was some drizzle, and Robb said it would rain in 15 minutes, so I left my camera in the car and wore my rain jacket. Of course, it didn’t rain, and I quickly regretted the hot jacket. And the cell phone camera I was stuck with. The hike was as advertised, a steep walk up a gravel road with no significant variation in the ascent. Power lines ran along the road. Trees crowded every horizon.

One could feel the vampires lurking, watching.

We looked for interesting things to break the grueling monotony. We found rocks, mud and power lines.

But we also found lots of ferns. Ten different species in all! 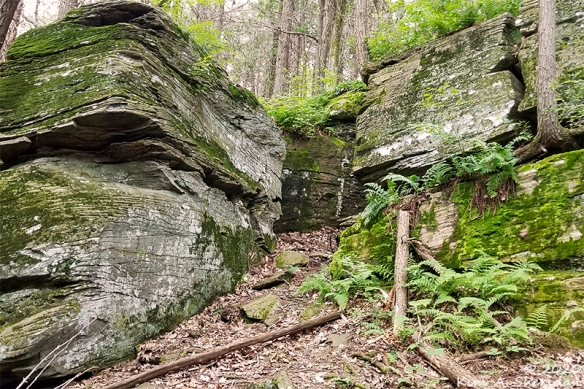 We also found some impressive boulders and rock outcroppings. The primary rock types in the Catskills are sandstones and shales.  Judging by the layers, these rocks were shale. The tree growing out of the boulder had split the rocks both horizontally and vertically.

This looked like the perfect place for vampires to hide.

Intrepid Don forged ahead to peer into every nook and cranny.  Robb hovered close behind.

Back to the trail. It was a steady slog up a nearly 10% grade. It was also growing warmer and more humid by the minute. 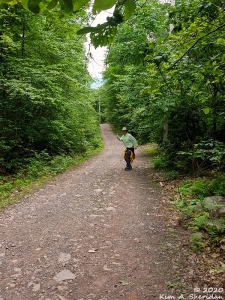 Robb kept our spirits up with his antics.

We pushed on to the 1-mile mark before giving up, well short of the summit. Over a mile of trail and 880’ of elevation gain lay between us and the fire tower.

Sweating and weary of the relentless climb, we’d had enough.

On the way down I took a snapshot of the only view we saw on Overlook Mountain. No fire towers or sweeping vistas for us that day.

Not even any vampires.

THE SERENITY OF THE MONKS

Whether Overlook Mountain gives shelter to the unholy is a matter for debate. If so, this is a place where the sacred and the profane butt heads, for the holy lives just across the street. 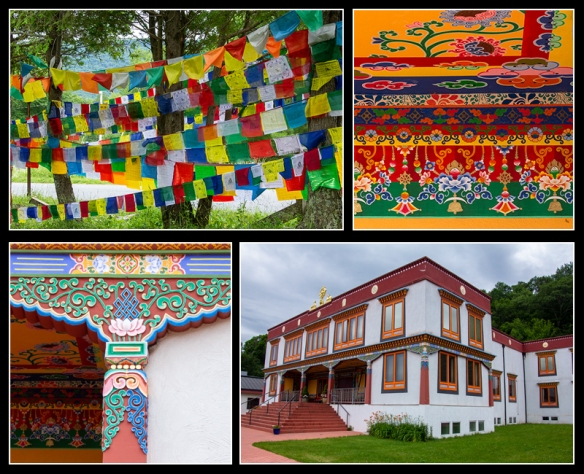 A short walk from the trailhead brought us to the gates of the Karma Triyana Dharmachakra Tibetan Buddhist Monastery. All roads and paths were lined with brightly colored prayer flags. A walled courtyard sheltered an education building and the intricately decorated temple. We peeked into the temple, first removing our shoes, and spent a lot of time in the gift shop.

Back across the road, we discovered the “Dharma Path,” a prayer-flag lined trail into the woods. Cool, green and shady, the perfect path for a contemplative walk. Or just to look at ferns. 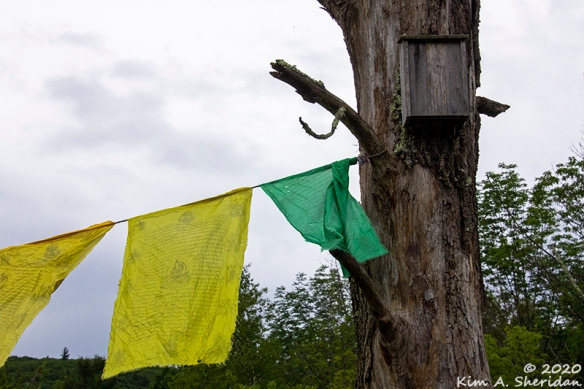 Buddhist monks are kind to bats! They have hung several bat houses near a small pond. My kind of people. 😊

Our visit to the Buddhist Monastery cleansed us of any residual ill temper from the vampires and left us relaxed. Serene. At peace.

Just in time to face the Devil himself.

FROM THE DHARMA PATH TO THE DEVIL’S PATH

As we wound our way through Stony Clove Notch towards home, we stumbled across a trailhead parking lot that looked interesting, and pulled in.

We had chanced upon the favored haunt of the Devil.

Long, long ago, Dutch settlers found much to fear in the deep narrow cloves of the Catskill Mountains.

And if the tales that are told are to be relied upon there can be no doubt that the Devil was once very active in the mountains.  He left the prints of his feet upon the rocks.  He strolled, he flew, he ran about the Catskills—he seems to have had a fondness for the region.  He was above all the good friend and adviser of the mountain witches, ever alert in prompting them to fresh acts of mischief and malevolence.

from “The Catskills: From Wilderness to Woodstock”

And here we were, at the Devil’s trailhead… well, one of several trailheads on the Devil’s Path, a rugged 23-mi long hiking trail that runs along a ridgeline over six mountains – Indian Head, Twin, Sugarloaf, Plateau, Hunter and Westkill.

So, of course, we had to walk the trail, and as soon as we got on it, Don got off it again. Up the hill and over boulders he scrambled, and the walk turned into a slippery wet scramble along the base of a cliff.

Robb, on the Devil’s Path. This part of the trail climbed the flank of Hunter Mountain. 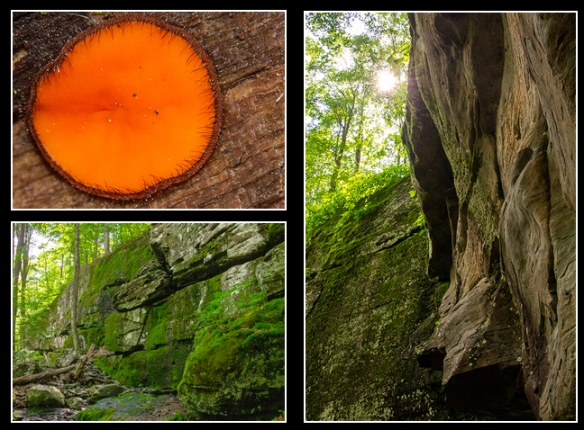 Soon enough it was time to push on for home. We paused for a moment on the shore of Notch Lake, in the shadow of Hunter Mountain, thinking of the strange and wondrous things we had seen.

Vampires and monks and the Devil… all in one day in the Catskill Mountains.

Wherever we go in the Catskills, we meet Rip. Today, it was in Phoenicia, where we stopped for lunch.

Wonder where we’ll find him tomorrow?