The destination at the end of this trail quickly became my new favorite place in Sleeping Bear: Empire Bluff, a sandy ridge high above Lake Michigan. The path to it snaked through thick forests of beech and maple, ending at a boardwalk along the bluff. 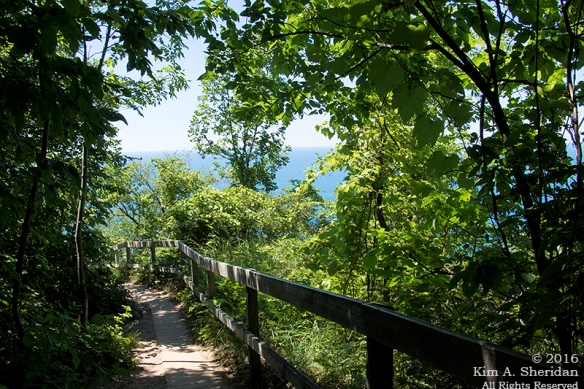 Openings in the greenery offered a sneak peak of the vistas to come.

Looking down at Lake Michigan 400 feet below. The variety of hues never cease to amaze me. How many names are there for these shades? Blue, green, turquoise, aquamarine, cerulean, azure, beryl, cobalt, peacock… I don’t think there are nearly enough words to describe the colors of the lake.

The view from the Empire Bluff Overlook. The shoreline stretches north along the Empire Embayment. A sand bar separates South Bar Lake from Lake Michigan. Sleeping Bear Dune itself – or what is left of it after years of wind erosion – is a small dark hill perched on the tip of the sandy bluff in the distance. Offshore to the left, partially obscured by cedar trees, is South Manitou Island.

Everyone comes for the view. Not everyone pays attention to it. Sometimes I wonder where the next generation of conservationists will come from if kids never get their faces out of their phones, even when in the presence of beauty such as this.

At least some folks are putting their phones to good use. I took cell photos here too, mostly to tease my friends: “I’m on top of the world, and you’re not!”

Not all is right with that world up here, but it’s hard to find fault with this loveliness. I was enthralled with the purple flowers that covered the open sandy slopes. I couldn’t resist them, even though I knew them for what they were – a dreaded invasive plant.

Spotted Knapweed, Centaurea stoebe, to be precise. It’s an Eastern European aster that arrived on the West Coast in the 1800s, probably in an alfalfa shipment. In 80 or 90 years, it spread to 26 counties in the Pacific Northwest. 20 years later, it was in 45 of 50 states. A pioneer species, it takes over fields, road sides, sand prairies, anywhere there is open disturbed land. Nasty, nasty, nasty.

But it’s such a pretty nasty…

This metallic green sweat bee thought so, too. There are a lot of species of sweat bees all over the world. Which one this is, I have no idea. It was enough to just watch it flashing emerald green in the sun, busily pollinating the invasive plants. 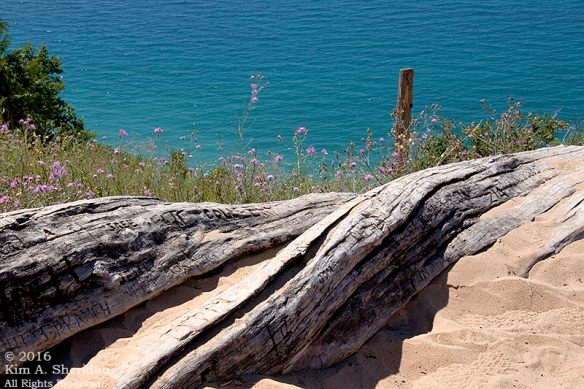 Driftwood and weathered old logs made for decorative accents among the wildflowers, grasses and small shrubs. 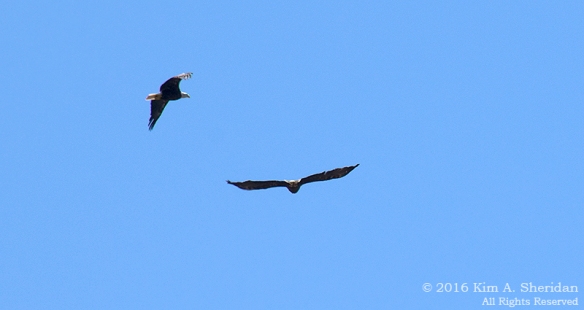 A pair of Bald Eagles soared over the ridge.

The joint was jumping, literally. Grasshoppers abounded. If I got too close, they’d hop a foot or two in the air, and fly away with buzzing wings. In flight, they looked like butterflies. Here’s the Grasshopper King, about to take up his scepter.

Looking up the hill to the east. 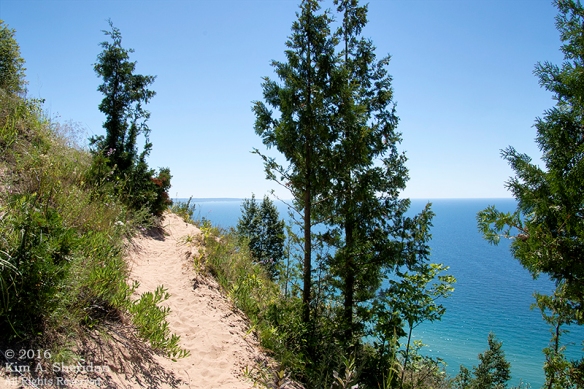 Beyond the boardwalk, the sandy trail continued along the knife’s edge of the bluff. To the south is Platte Bay. I turned back here, leaving other wonders to be discovered another time.

That’s the thing about favorite places. They always leave you wanting more.