Wherever my friends and I go, we try to get to the top of the highest mountain around. So on our Adirondack adventure, we were keen to get to the very top of the High Peaks. That would be Mt. Marcy, 5,344’ high. “How do we get there?” we wondered. Hike 7.4 miles through wilderness to the summit, then hike 7.4 miles back. Ok, maybe not.

Still, we were determined to get to the top of one of “The 46”, as the 46 High Peaks above 4,000’ are called. Folks who have successfully climbed all 46 are called “Adirondack 46ers.” We only had one day to get to the summit of a High Peak, and our experience on the relatively puny Pitchoff Mountain taught us not to take these mountains lightly. What to do?

Enter Whiteface Mountain, 4,867’ tall, the fifth highest in the state of New York. There’s a road that does 4,600’ of the work for you, with an elevator that takes tourists the rest of the way. How hard could it be?

We arrived at the Tollhouse on Whiteface Mountain Veterans Memorial Highway on a warm, partly sunny day. First thing we’re told: the elevator’s out. If we want to get to the summit, we’ll need to walk up the 1/5-mile (1,056’) Nature Trail. That didn’t sound too tough.

From the Tollhouse, Whiteface Mountain Veterans Memorial Highway winds up the mountain for 5 miles.  We stopped at every scenic overlook, and took in the vista to the northeast. This was our first stop; pretty nice view, yes? As we climbed, the temperature dropped. Feeling the chill, Don put his jacket on. 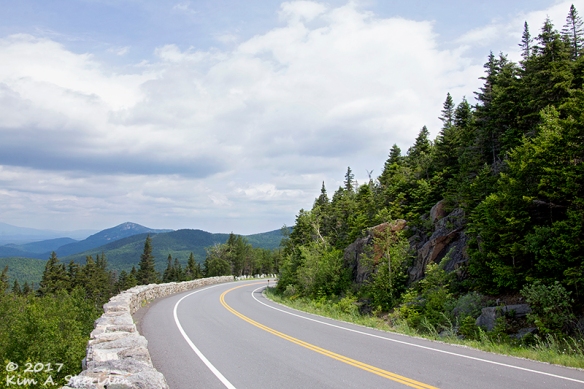 Enjoy that blue sky while you can; we wouldn’t see it again on this journey, and neither will you.

It was fun to see the sequence of habitats changes as the altitude increased. At the gatehouse, we were in a typical sugar maple/beech/birch mixed hardwood forest. Here we found ourselves in a spruce/fir forest, with a few birches and mountain ashes mixed in. 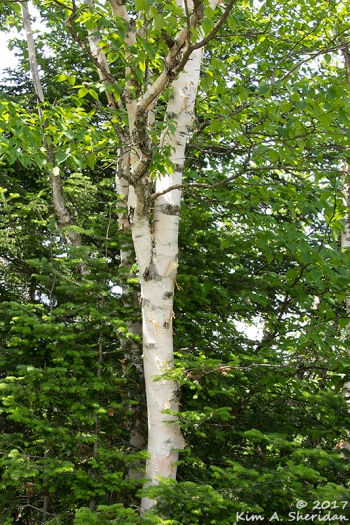 Thanks to the frequent and informative interpretive signs, we were introduced to a new tree, the heart-leaved birch.

We passed through other vegetation zones as we climbed. Next up was the krummholz.

We’ve encountered it before in other windswept areas, such as the Dolly Sods in West Virginia.

We got some good views of the upper roadway and the buildings on the summit. At the end of the road is Whiteface Castle, at right. It houses a café and gift shop. 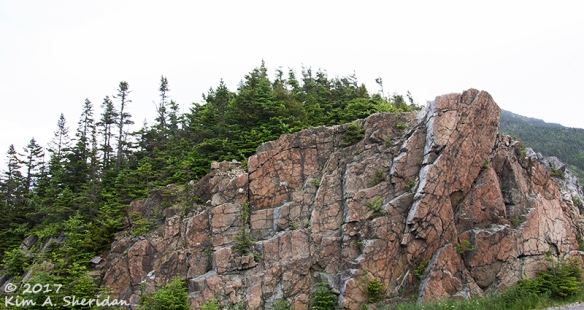 We’d been driving up one side of the mountain, seeing mostly the same view. A big hairpin turn around this cool rock outcropping took us to a new vista. 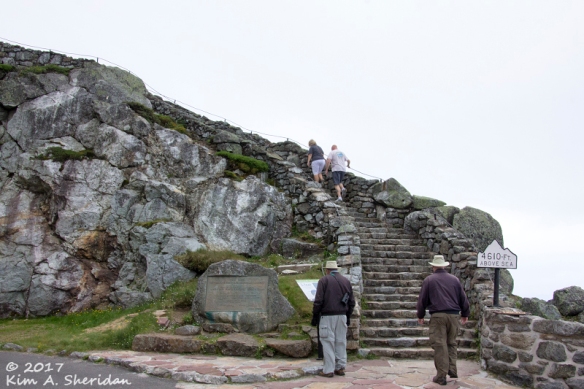 Soon enough, we reached the Castle at 4,610’ (note the elevation sign to Robb’s right. Also note that he’s wearing a jacket now, and Don is wearing gloves; it’s in the 50°s, and windy. Other tourists look a little under-dressed for the weather.)

After a nice lunch at the Café, we were ready for the short walk to the summit of Whiteface. Look, they’ve even given us steps to make our walk easier. Easy peasy, right?

Um, maybe not. Those steps disappeared pretty quick. What remained was 1,000+ hard feet of climbing up 257’ of altitude; that’s a 25% grade.

Adding to the difficulty was the surface – uneven and slick rocks. Much of the climb involved stepping from big rock to bigger rock, often just a little too far and too high for my legs to reach.

Don’t look down! The trail climbed the knife-edge of a ridge; a few feet on either side was a near-vertical drop. Fortunately, there were those handrails…

There were a lot of people, including kids, going both directions on the trail. Pacing yourself, reading the frequent interpretative signs and taking photos, wasn’t in the cards. You had to keep up with the flow. I don’t know the gentleman at left, didn’t get a modeling release, but he gives a nice sense of scale.

Here is where we were all going. On the summit of Whiteface Mountain is the Atmospheric Science Research Center & Summit Weather Observatory. The elevator ends here, when it’s working. Surrounding the buildings is a wide patio offering 360° views of the Adirondacks, and on clear days, Lake Champlain, Vermont and even Canada. We didn’t have a clear day; it was quite hazy. 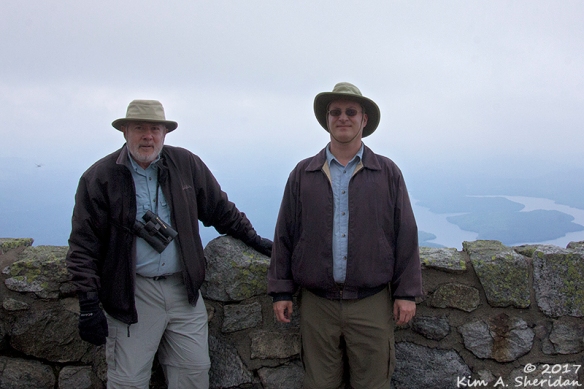 Don and Robb at the summit of Whiteface Mountain. Lake Placid in the background. Yes, that is a bug to the left of Don. There were a surprising number of insects up this high. Also, large black birds. An argument about whether they were crows or ravens immediately broke out, and was never satisfactorily resolved.

Beyond the patio was a wide expanse of bare rock, which we happily explored.

FUN FACT: The Adirondacks are the only mountains east of the Mississippi that are not geologically related to the Appalachian range. It took us a while to accept that! The Adirondacks are part of a much older formation that formed over a billion years ago under miles of overlying rock. Through repeated uplifts and erosion of overlying material the mountains are now exposed. The predominant rock of the High Peaks area is anorthosite, an igneous rock rich in feldspar. If at times on the summit we felt as if we were exploring a lunar landscape, there was good reason – anorthosite is more commonly found on the Moon! 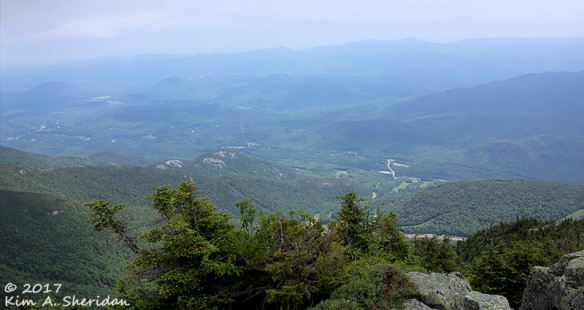 Looking over the edge, toward the ski basin below.

This old rock slide looked like a fun adventure. We took the easy way down, though.

This is the easy way, the trail. From this, and the image at the beginning of this tale, you can really see how narrow the ridge line is. The top of the Castle tower just peeks above to the right, with parking area visible far below.

Down went Don and Robb.

One last view from Whiteface Mountain. The Memorial Highway snakes down the mountain face and then winds around Esther Mountain before returning to the Tollhouse.

Whiteface Mountain, NY, elevation 4,867’? Yup! Now we can say we climbed one of the ADK 46, and experienced the wonder of life on the summit of an Adirondack High Peak.