Magnificent vistas and majestic trees abound in West Virginia. Down every country road lie mountains, farms and forests that fill the eye and viewfinder with grand lush life. Raptors soar overhead, while bears, bobcats and foxes lurk around every bend.

But no more than a bear can pass up a blueberry bush could I ignore the small treasures encountered on the trails. It’s just who I am, a champion of the small and overlooked.

There’s a lot of life on the forest floor.

I’m told I look at my feet too much when I walk, and rightfully so. But if you never look down, there’s so much that you’ll miss.

Like the wonderful texture of the mushrooms. We encountered them wherever we went, and I never resisted the urge to photograph them. Spruce Knob.

I did resist the urge to pick them, and never even felt the urge to eat them. I’m not an expert on mushrooms, and many can be very poisonous. Spruce Knob.

Sprouting from the forest floor is a golden umbrella, likely an Amanita of some kind. Beautiful to look at, but toxic. Blackwater Falls State Park.

Red, yellow, white and green; mushrooms in all the colors of the rainbow break down dead or dying organic matter. Life from death in Cathedral State Park.

Along with the more familiar-looking cap mushrooms, we found a few coral fungi. Spruce Knob.

You’ll find some weird things on the forest floor – if only you take the time to look down. Coral Fungus, Cathedral State Forest.

Salt and pepper? Not quite. Click the photo for a closer look. Bartender, small black lichens, on the rocks, please! Spruce Knob. 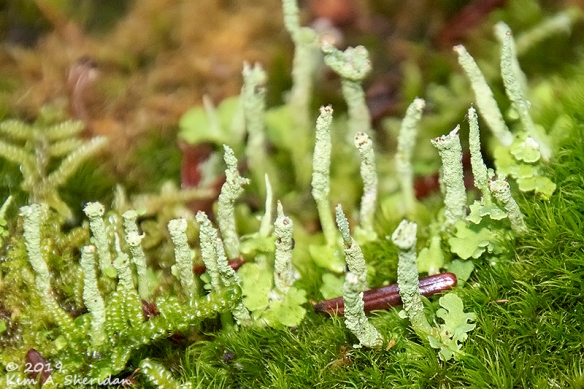 Another lichen. As with mushrooms and mosses, I am a beginner in lichen ID. Most of the time I have an idea, but I usually refrain from making that public. Here I’ll go out on a limb – my guess is Common Powderhorn. Cathedral State Park.

Ah, flowers. Flower identification I can handle. Let’s see – it has four petals. Or is it five? Opposite leaves – maybe. And are they entire, or toothed?

Phooey. Like so many of my photos, I haven’t captured enough detail to identify the species. 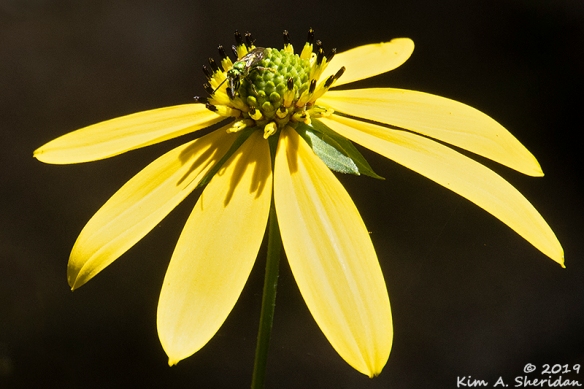 Sunflower. See the metallic green bug? Our first critter! Never would have seen it if I’d only looked up at the trees. Click the photo for a closer look. Cathedral State Park. 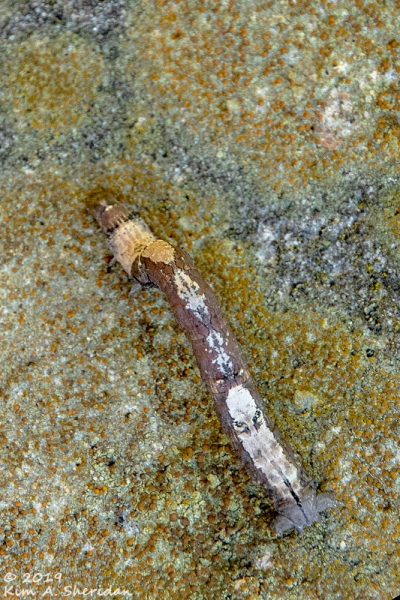 A few from the “Which End is Which?” files.

The caterpillar of the geometer moth only has legs – known as “prolegs” – at each end, with none in the middle. Locomotion is a little different.

By the way, that’s his head at the upper left.

Heads or tails? Another confusing caterpillar. This one is facing left. How do I know? It helps to have multiple images showing which way the critter is moving! Tussock moth caterpillar, Fairfax Stone Historical Monument State Park.

So far all of these sightings have been mine. I have a reputation for spotting the pint-sized pleasures peppering the forest floor. It’s that always-looking-down thing. Just see all the wonders that would have been overlooked.

I can’t take credit for this spot, though; this next beauty is all Robb and Don’s.

Ah, that’s better. This might be the best find of the whole West Virginia trip. I haven’t seen one of these babies since I was a teenager. Which only means that I need to get out more, and learn how to find them on my own. They’re quite common, if shy.

This is the juvenile phase of the Eastern Newt, Notophthalmus viridescens.  Newts are a type of salamander, amphibians that rely on aquatic habitat to breed. Juvenile newts are semiaquatic, alternating between water and land. Robb and Don found this fellow on some leaf and stick litter, and I was lucky enough to get a few shots before he disappeared under a small log. The juvenile phase is so familiar it has its own name.

Look up and look out – but don’t forget to look down. From towering trees to grand landscapes to the tiny delights of the forest floor, there are heavenly wonders any way you look in West Virginia.