In the throes of Fern-Fever, my friends and I spent countless hours trying to identify ferns in the field. The divisions and shapes of the pinnae, the form a cluster of ferns takes and the habitat where it lives all offered clues to a fern’s name.

But I quickly developed a habit of turning the fronds over to look at the underside, for I knew the strange structures found there held the key to the identity mystery. What was I looking for? The “fern-seed” of Shakespeare? 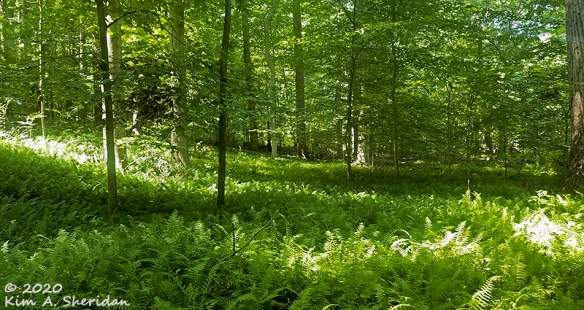 Centuries ago, before we understood fern reproduction, people assumed that ferns have seeds. No one ever saw a fern-seed, so people concluded they must be invisible. Thus, getting fern-seeds in your shoes or pockets must make YOU invisible.

By the late 1600s, observers had noticed the tiny clouds of dust that emanated from dark lines or spots on the underside of ferns’ pinnae. They believed this was the fern-seed. In 1794, John Lindsay observed and described the fern reproductive cycle, in the process teaching a whole generation of gardeners to propagate their own ferns for gardens and greenhouses. But he still called the dust “fern-seed.” It wasn’t until the 1840s, in the midst of Victorian Fern-Fever, that the truth was known.

Let’s get something straight right off the top. The old wives’ tales are wrong: ferns do NOT have seeds. They have spores, something different altogether, and sexual reproduction by spores is a complicated two-stage process.

A mature fern has hundreds of structures called sori, usually located on the underside of a frond or on a separate fertile stalk. Within each sorus is a cluster of sporangia that contain spores.

At the right moment, the spores are released from the sporangia. An individual spore lands somewhere suitable and grows into a gametophyte (or prothallus) – a microscopic plant which bears the sex organs. The male antheridia produce sperm and the female archegonia produce eggs. This is the gametophyte generation.

In the presence of water, sperm will fertilize an egg, on this plant or another one. The fertilized egg grows into a young fern that will become a mature, spore-producing fern, the sporophyte generation.  And the cycle begins anew.

DISCLAIMER: There’s always an exception to any rule. Not every fern species has every reproductive structure mentioned above. Also, in addition to producing spores, many fern species can reproduce asexually in a variety of ways. That’s a discussion for another day. Our focus here is on the production of spores, and their effect on a fern’s appearance.

When we are identifying ferns, it’s the position and the shape of the sori that often give away a fern’s identity.

Sori are frequently found on the back of the fern’s pinnae. That’s why I’m always turning over fronds to look at the back. The shape they take depends on the species. For example, wood ferns have round sori that often lie centered between the midrib and edge of the pinnules.

Except… Marginal Wood Ferns have sori along – you guessed it! – the pinnule margins.

Elongate sori often take a herringbone pattern, such as here on a Silvery Glade Fern.

If the sori are hooked, you may be looking at a Lady Fern.

Sori may also be carried on a separate fertile stalk that looks different than the sterile frond. Sensitive Ferns are a common example of this. The small hardened pinnules roll inwards to cover the sori. They look like little beads on a stick.

Sensitive Fern sori turn dark brown, persist throughout the winter and release their spores in the spring.

Cinnamon Ferns also have separate fertile stalks. They can be quite dramatic.

However, they don’t last long! There’s just a couple of weeks at most in the spring to find them.

In another Osmunda species, Interrupted Fern, small fertile pinnae with sporangia appear in the middle of the frond, between sterile pinnae.

The sporangia wither quickly after releasing their spores, leaving a gap in the fertile frond. It’s easy to see where the name “Interrupted Fern” comes from!

From sori to spores to gametophytes and so on through fertilization to the young fern: fern reproduction is a fascinating and complicated process.

It does NOT, however, involve “fern-seed”! 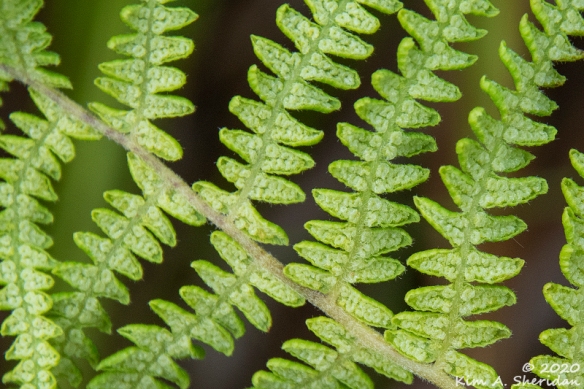