Have you caught Fern-Fever yet? Are you now seeing ferns everywhere when you wander through the woods?

In this series so far, we’ve been learning how to identify ferns. We’ve also taken a deep dive into the complicated world of fern reproduction by spores. Now that you are an expert, here’s a little pop quiz.

Just kidding! There’s no quiz. It’s time to leave all the botanical nitty-gritty behind, and meet some new ferns. Join me in a fanciful field trip to get to what really matters: the wonder, beauty and just plain weirdness of those fantastic ferns. 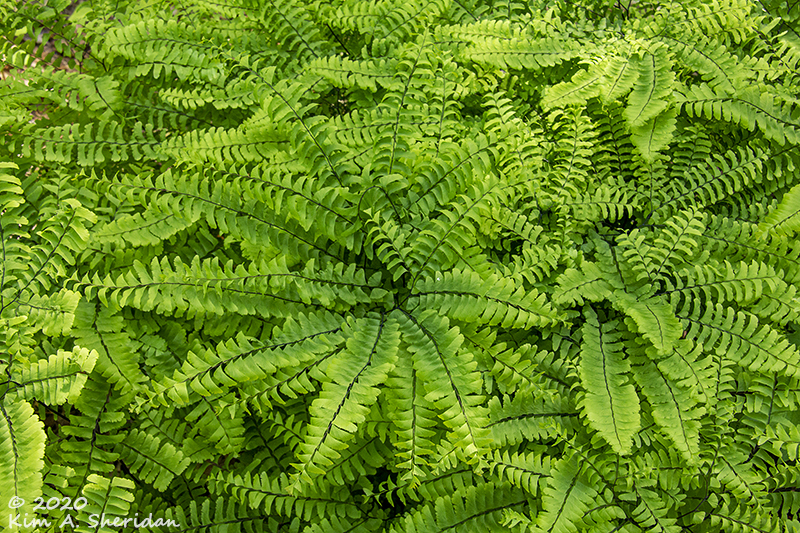 Along a wooded path, one of the first ferns we meet is Maidenhair, and what a fantastic fern it is! Not to mention one of the most beautiful. This delicate fern’s pinnae spread out in an emerald fan, lined with glossy dark ribs. 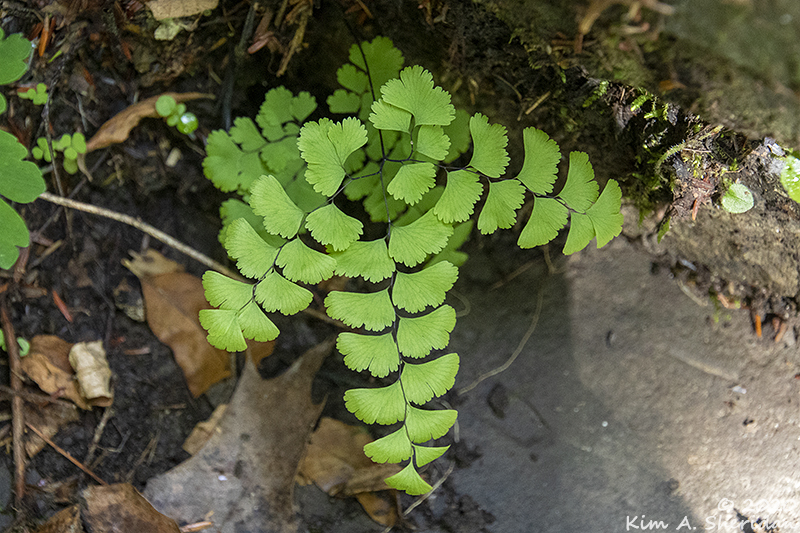 Even the pinnules of this young Maidenhair Fern are distinctly fan-shaped. 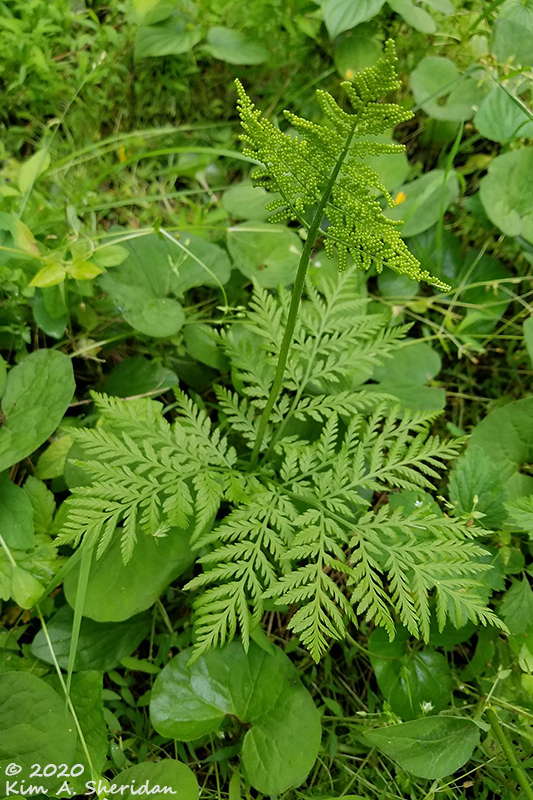 A little deeper into the forest we come across a Rattlesnake Fern. It may look like it has three sterile fronds, but this is a single, broadly triangular frond, with the fertile stalk rising above it.

Look closely. Does the fertile stalk remind you of a bouquet of rattlesnake tails? 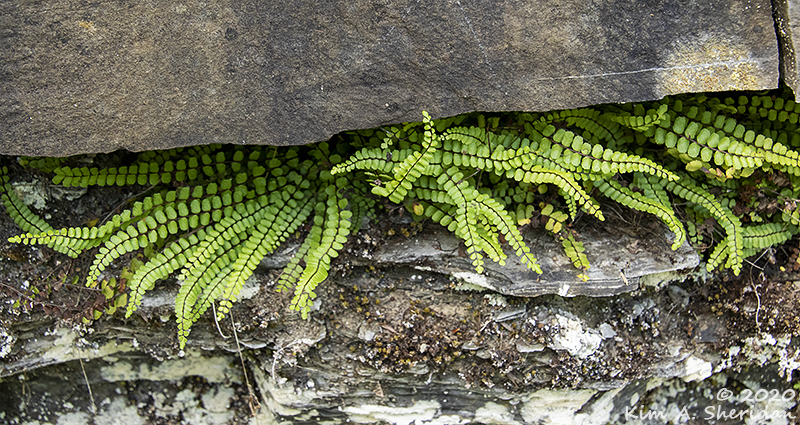 Now the trail begins to climb among boulders and rock walls. What might we find here? An octopus reaching its tentacles out from a rock crevice? No, it’s Maidenhair Spleenwort, a small fern that loves these rocky abodes. Its dark rachis and the shape of its pinnules resemble those of Maidenhair Fern, but the two are not related. 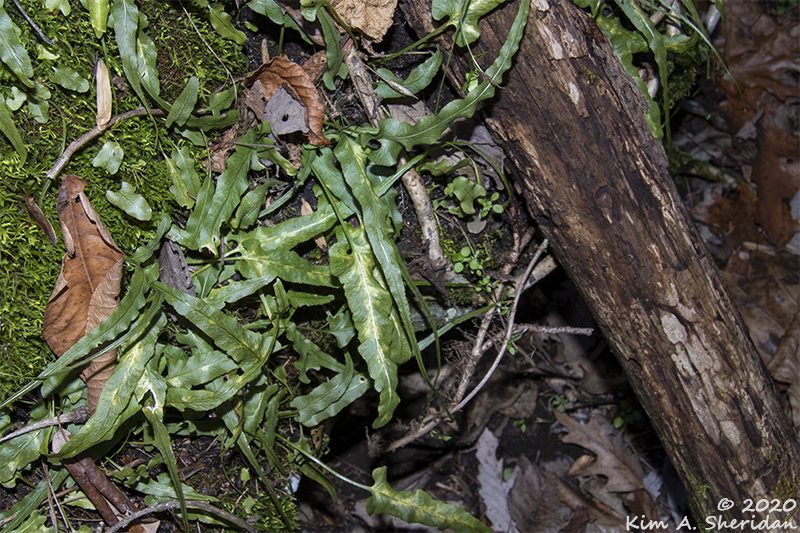 As we move along, the ferns are looking less and less like ferns – at least like the “classic” ferns we met in the first two parts of this series. For instance, the boulders here are blanketed by Walking Fern. With its undivided pinnae, it looks more like a house plant. It’s uncommon and difficult to find. My friends and I have only seen it twice, always a thrill. 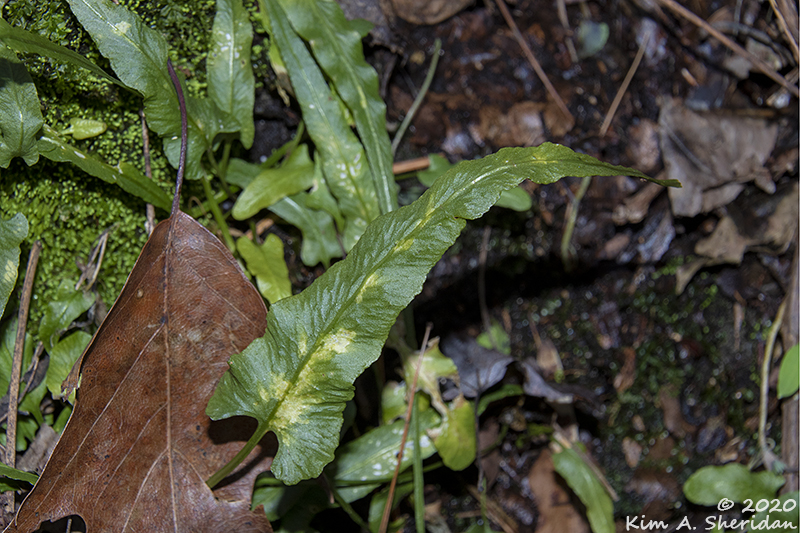 Walking Ferns grow among rocks, and though they have sori like most ferns, they have another reproductive trick up their sleeve – they walk! 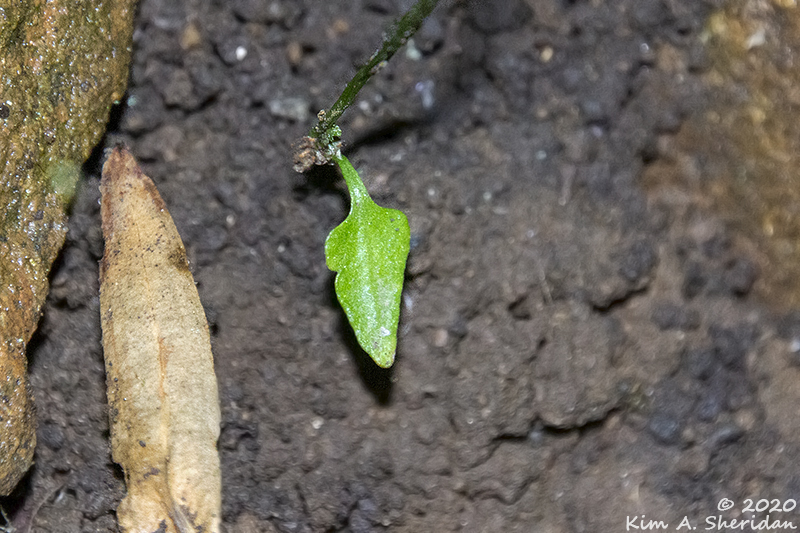 At the very tip of the long-tapering pinna, sometimes a plantlet will form. When this takes root, a new plant grows from it. As it makes new plants, it “walks” from place to place. 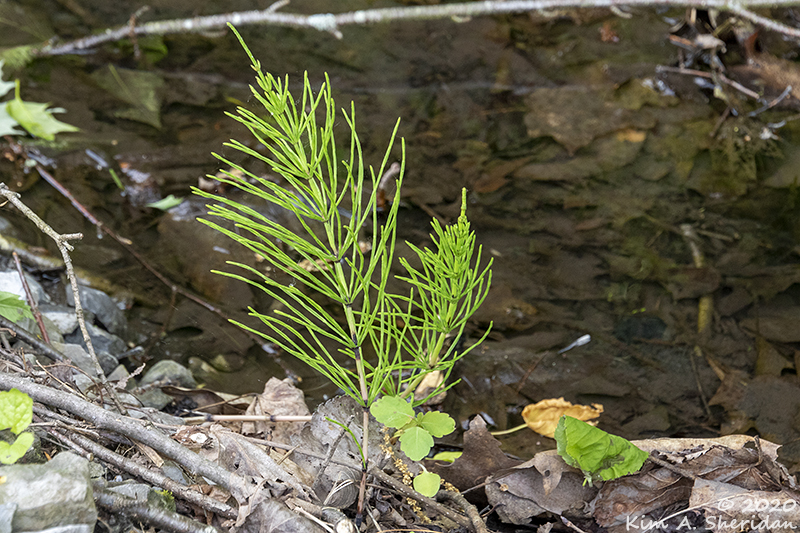 Along a creek in a rocky gorge, we come to yet another plant that looks nothing like a fern. This is Field Horsetail. The bristly, whorled branches look like a horse’s tail, yes?

Once upon a time, the horsetails were called “fern allies”, grouped with other spore-bearing plants like the lycophytes. Related to, but separate from, the “true ferns”. Surprise! Genetic analysis shows that horsetails and ferns are so closely related they are now grouped together as ferns. 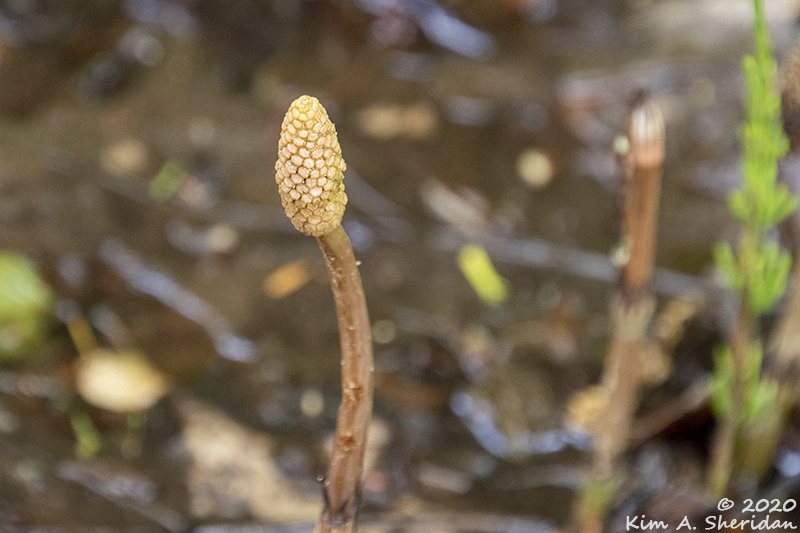 Horsetails have spores as most ferns do, but not sori. Instead the sporangia are clustered in cones at the top of a separate fertile stalk.

On the far side of the ridge lies John Heinz National Wildlife Refuge. We know there are a few fern species there. But surely this isn’t one of them? Oh yes, it is! Mosquito Fern is an aquatic fern. It floats on quiet fresh-water rivers and ponds, often in the company of the larger-leaved duckweed. The fern can form a dense mat on the pond’s surface that prevent mosquitos from laying eggs in the water – hence the name, and my undying gratitude. 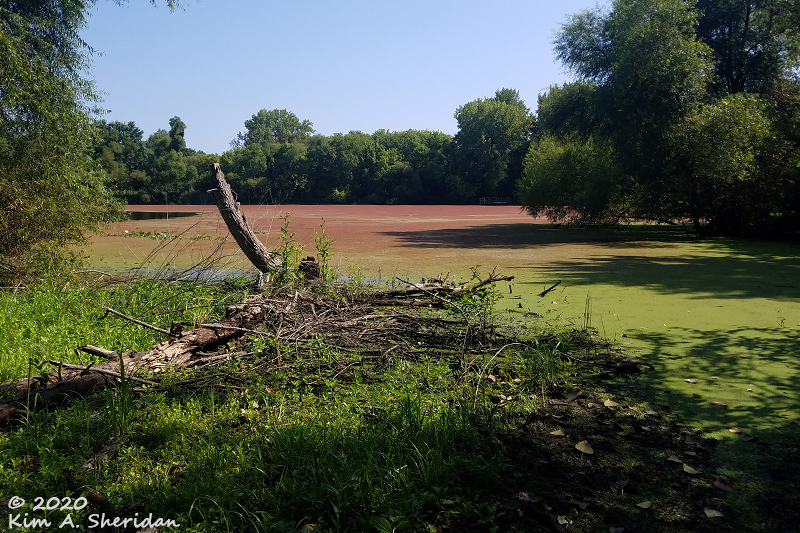 In the shade, Mosquito Fern is green. In sun, it changes color to tint the pond’s surface red. We don’t know why Mosquito Fern appears on this pond at the Refuge in some summers, but not others. Ah, the mysteries of ferns.

Let’s go to Pine Barrens of New Jersey. This is an imaginary field trip after all, we can go anywhere we want! Walking along a dark cedar river, we admire the little sundews nestled in the curly grass. 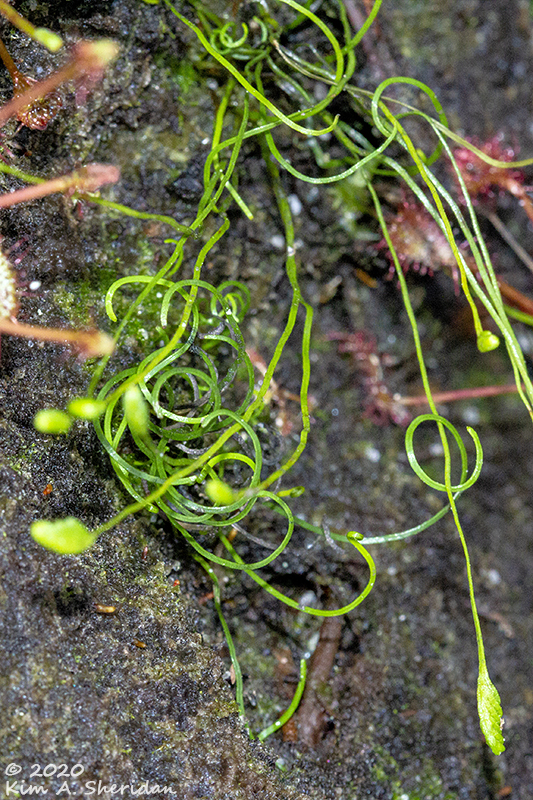 The aptly named Curly-grass Fern is a rare and very tiny plant that grows in only a few places, including the Pine Barrens.

In fact, it was first discovered at Quaker Bridge in the Pines back in the early 1800s. The sterile fronds look like – well, curly grass. 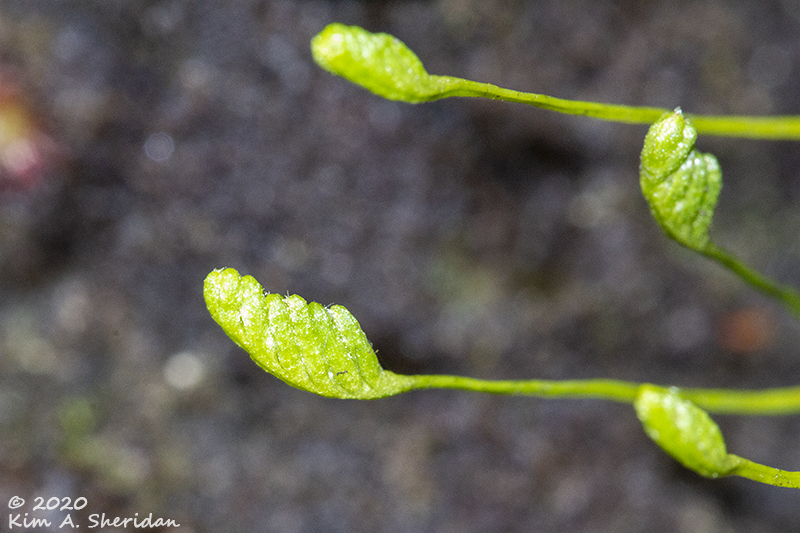 These are the comb-like fertile fronds. Curly-grass fern lives in bogs and on sphagnum hummocks. Photographing these truly diminutive plants where they grew on the side of a river bank was a real balancing act that nearly ended in wet embarrassment. We haven’t seen this fern since, no matter how hard we’ve looked. 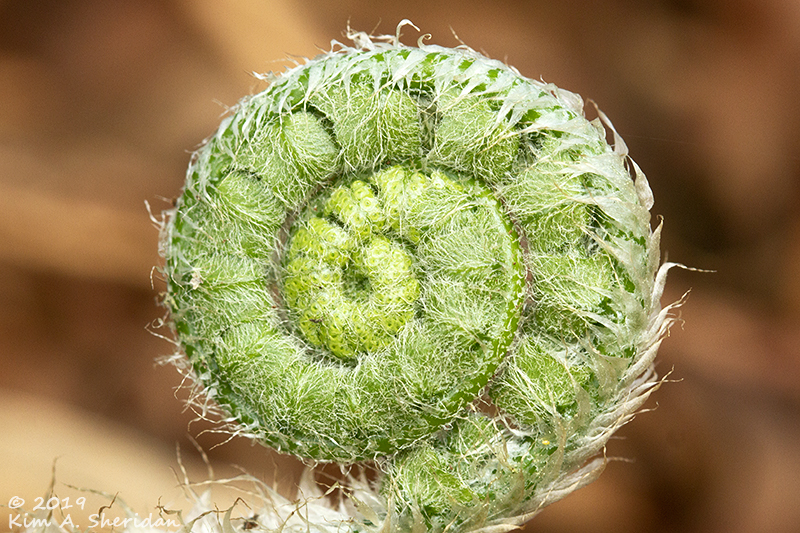 Since this is a make-believe walk, let’s make believe it is spring. That’s my favorite time to photograph ferns, when the new plants are just sprouting. 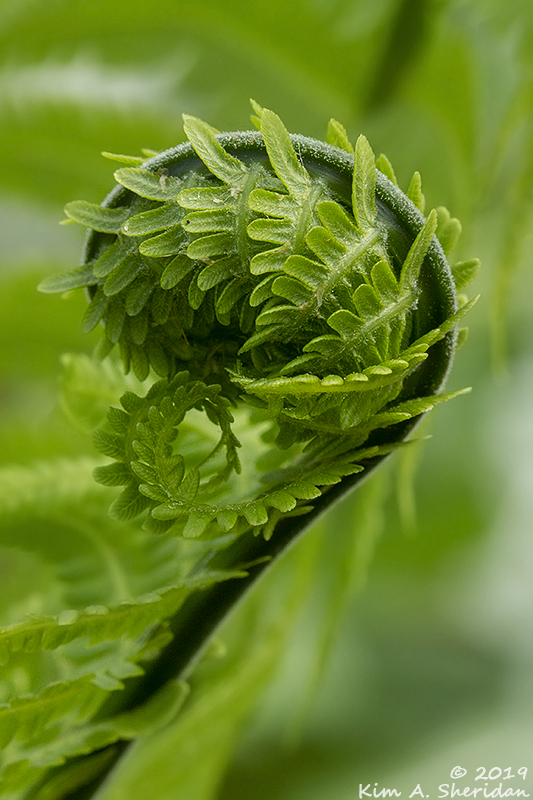 A new frond arises from the ground rolled up into a ball. This looks like the neck and scroll of a violin, and thus these baby ferns are called fiddleheads.

The fiddleheads of Ostrich Ferns like this one are considered a culinary delicacy. Other ferns are not so tasty or healthy.

No matter the species, I’d rather enjoy their beautiful spirals where they grow in the wild. 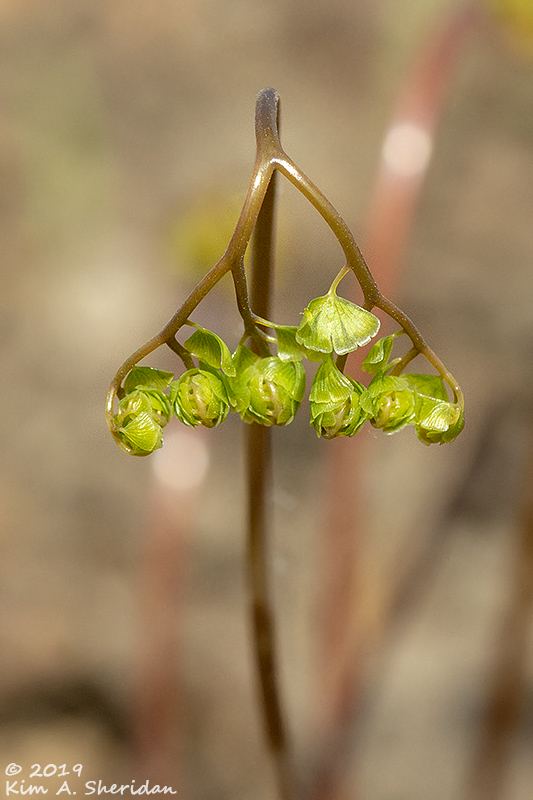 As with the ferns themselves, the fiddleheads come in a bewildering variety of shapes, sizes and colors. 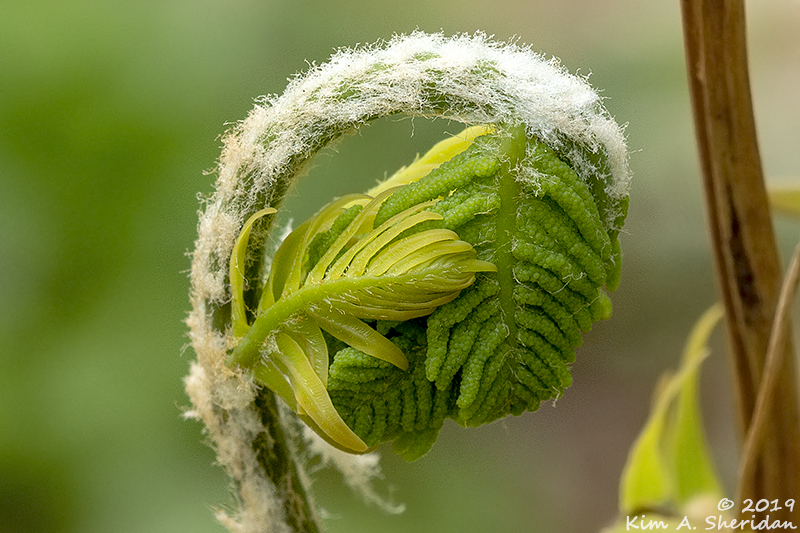 Mature Royal Ferns have both sterile and fertile fronds. Take a look at this fiddlehead. Can you tell which of these baby fronds will be which?

Ferns grace our world with their beauty for most of the year, with some species persisting even in the dark days of winter. Yet they are overlooked by most who wander through the woods. I’ve known people to insist there are no ferns in a wild place they know well – and then they’re startled, and somewhat chagrined, when we point out the hillsides covered with ferns of many species. 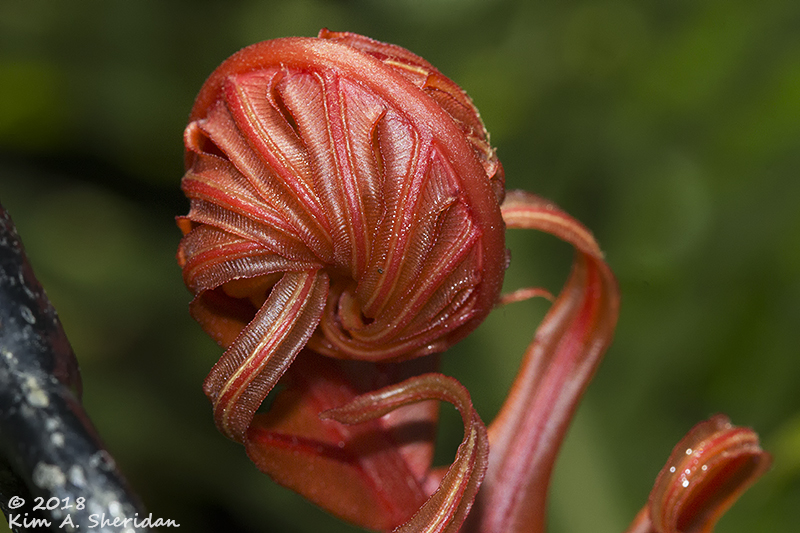 How about you? Now that we’ve introduced you to their variety and beauty, will you continue to overlook ferns? Or have you, like my friends and I, caught an incurable case of Fern-Fever?

2 thoughts on “Pteridomania: Fiddling Around with Those Fantastic Ferns”