A melody drifts over the meadows, to the accompaniment of cicadas and crickets and birdsong. The tune is deep purple and golden, and it calls to the small creatures of the air with a silken voice: “Come to me! Feed on my rich nectar while you may!” The little aerialists are happy to oblige, raising their voices in sweet harmony to the music of the wildflowers until all the world is ablaze with the Song of September.

With the sun rising on the September meadow, the choir warms up. Asters run through their scales, blue and purple and white. Their liquid voices float along on a wave of dew. Their cousins, the snakeroots, bonesets and sunflowers, practice deeper harmonies. 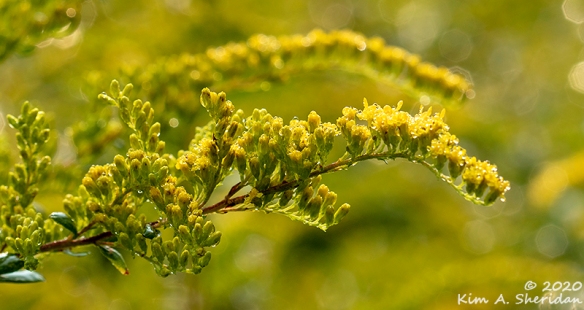 Goldenrods know they are the stars of the choir, the showy lead voices everyone wants to see. In late summer, the song is all about the goldenrods. They’re tiny yellow prima donnas on arching stalks of green, great fields of them spreading in all directions.

The anticipated concert of asters, sunflowers and goldenrod quickly draws a crowd. It’s a limited engagement after all, a last chance to take in the mellifluous nectar before the show closes for the season. The performance is an instant sellout.

Pay no heed to the scalpers hovering at the edges. At any popular event, there are a few nefarious characters hanging around. A Praying Mantis waits motionless on a bench. His large eyes track any unwary soul venturing too near his perch.

Eyes averted, late-arrivers scurry past this robber fly. His name alone – Red-footed Cannibalfly – tells you all you need to know of his reputation. 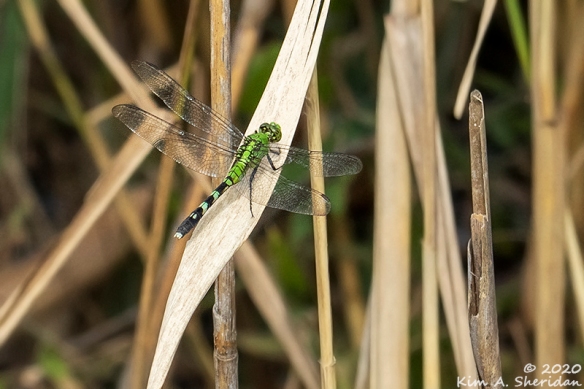 The Eastern Pondhawk in the reeds doesn’t seem menacing at all. But like the mantis and the robber fly, this beauty is a predator. She’s not here for the sweet nectar rhapsodies that swirl over the meadows. She’s here for the concert-goers.

Most of whom make it safely into the broad theater of wildflowers. They dive right into the billowy sea of  flower song.

Skippers are among first to take their seats… 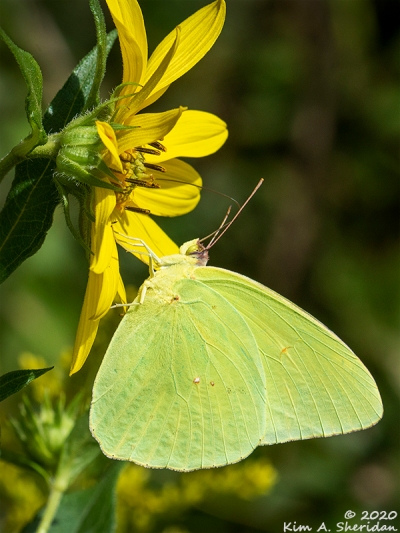 …as do the Cloudless Sulphurs. 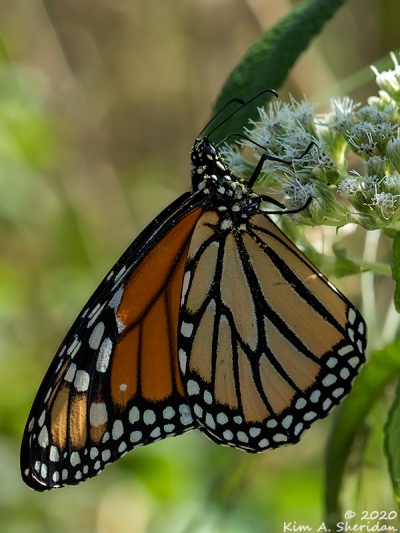 The Monarchs applaud the opening phrases with unbridled enthusiasm. The song has commenced!

September rings out in ripples of sweet meadow voices, asters and goldenrod in perfect harmony.

In Defense of Goldenrod: If you have allergies at this time of year, you may blame the goldenrod. Not so fast! Goldenrod is showy and ubiquitous, but it’s the ragweed, with its inconspicuous green flowers, that causes all the trouble. Ragweed has tiny pollen that is easily carried on the wind to the noses and eyes of allergy sufferers. Goldenrod’s pollen is too heavy to be windborne, and it depends on insects to be carried from flower to flower.

At this performance, a large contingent of different concert-goers are sporting similar outfits adorned with yellow and black stripes.

He’s distinguished by his smooth black abdomen, the black leather pants of the insect world.

The one wearing the fuzzy trousers is a Common Eastern Bumblebee.

Some bees are late, arriving straight from the shower, still adorably wet with dew.

The music rises and swells, and the bees hum in time. Audience participation is encouraged, and passions run high, stirred by both the passionate refrains and the Passion Flowers. A Carpenter Bee loses herself in rapture.

Who is this shy lady, peering over the edge of the balcony?

She’s a Southern Yellowjacket. And she’s not shy at all. This colorful wasp is here for the music, but also to see and be seen. A little vain, she is quite proud of the slender waist that distinguishes her from the rotund bees. 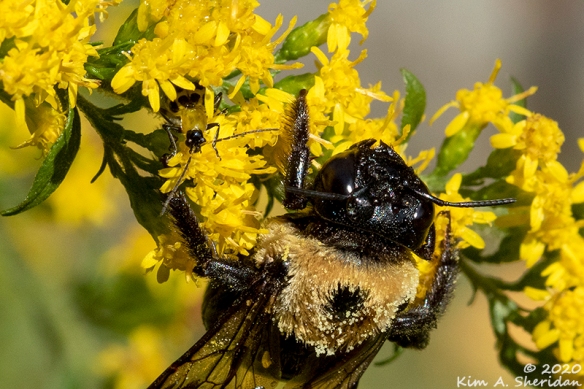 Ah, but those chubby bees are just so cute! Especially as the tune slows to a lullaby, and some bees begin to nod off. One dozes, and the Yellow Cucumber Beetle seated to his left thinks about poking him awake.

FUN FACT: Yes, bees sleep! Their eyes don’t close, since they don’t have eyelids. But their antennas stop moving, they curl their abdomens in and off to sleep they go. They may even dream! Scientists studying honey bees have found they use several hours of sleep each day to consolidate their experiences into long-term memory, much like humans do. These days I regularly find four or five motionless bees snoozing away in my goldenrod in the early morning. 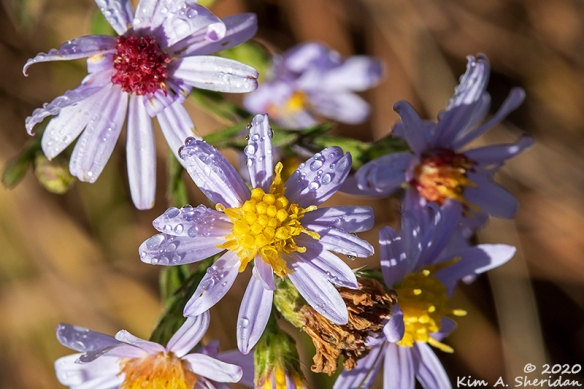 Soon enough, the music begins to change. One last burst of lavender aster aria heralds the arrival of autumn.

Voices fade to the background, their color and timbre shifting to the muted russet tones of bush clover.

The meadow, once awash in brilliant gold, rests as the last strains soften to silence. The Song of September is hushed. The land waits, tremulously, for the next movement. For the music of Nature is never ended, only continuously transformed.

What will October sing?