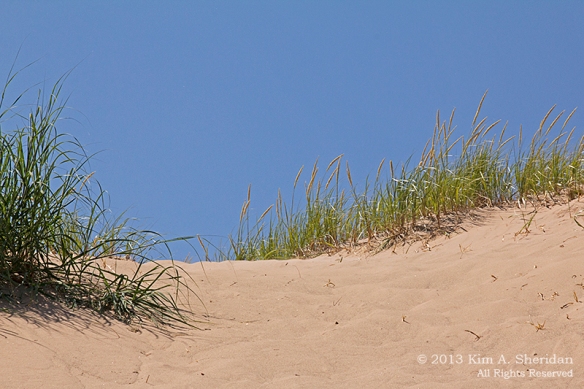 What else is there to do on a warm and sunny day at Sleeping Bear Dunes National Lakeshore, after spending several hours on the Scenic Drive? Why, the Dune Climb, of course.

The National Park Service would really prefer that visitors not climb just any dune in the park, due to their fragility and steepness. So the Service has set up this 150’ high dune where people can climb safely. And what a set up it is: There’s a huge parking lot, restrooms, a Park store, picnic tables and vending machines. All of which is smartly situated at the bottom of the dune. When you climb, you get the hard part over first, and then get the fun of running back down.

Nearby a wooden beam shows the progress of the moving dune. It was placed here in 1985, and the edge of the dune is now sitting around 66’ in from the end; that means the dune is moving at a rate of 2.36’ a year.

I was a bit of a party pooper here, and didn’t climb the dune. I don’t really like going uphill in soft sand under a hot sun. Besides, the NPS vending machine ate my money without giving me a Klondike Bar, so I was cranky. I did go for a peaceful walk in the woods along part of the paved Sleeping Bear Heritage Trail. I also enjoyed reading the license plates in the parking lot. There were people that drove from as far away as Idaho and Vermont. 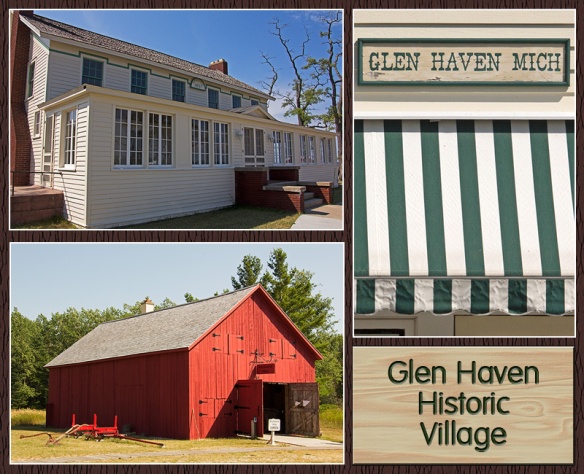 Glen Haven is a village restored to its heyday as a company town and port for steamboats. Sleeping Bearville, as it was once known, was active from 1865 on. Above, clockwise from top left: The Sleeping Bear Inn, which was built in 1857 and served guests until 1972. The awning of the Glen Haven General Store, as it appeared in the 1920s, when it was run by local lumber baron D. H. Day. The Blacksmith shop.

David Henry (D.H.) Day ran the town of Glen Haven from the late 1800s to the 1930s. He financed and built houses for the workers, and was school superintendent. Above, clockwise from top left: The house Day built in 1890 for his wife – she preferred living over the store! The Glen Haven Canning Company, started in the 1920s by David Day Jr. after the collapse of the lumber industry, canned cherries, peaches and apples; today it houses a small fleet of old Lake Michigan boats. A house for a worker’s family. One of the boats on display in the Cannery.

In 1901, a United States Life Saving Service station was built on Sleeping Bear Point. It was much needed – there have been more than 50 shipwrecks in this vicinity. The Service became part of the U.S. Coast Guard in 1915. By 1931, the station had been nearly buried by sand, and the buildings were pulled, by horses, to their present location. The introduction of “unsinkable” 36’ motor boats, which could only be launched from harbors, made beachside stations like Sleeping Bear Point obsolete, and it closed for good in the early 1940s. Today it houses a museum showcasing crew life, the Life Saving Service and Great Lakes maritime history. 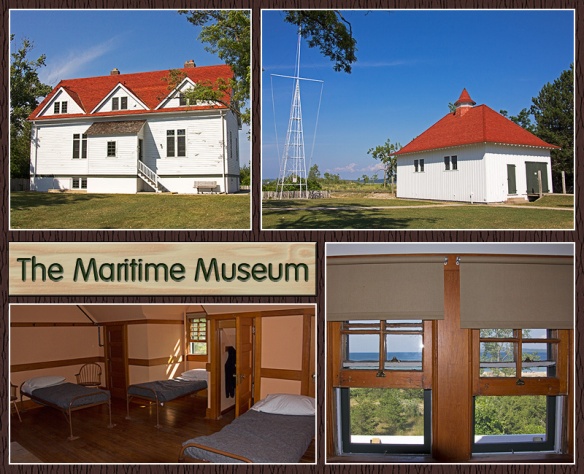 Above, clockwise from top left: the main crew quarters. The boat house. A view of the lake from an upstairs window. Part of the crew’s bunk room. The room housed seven men, who each had their own bed and small closet. Quite an austere existence for men who stood ready to risk their lives in the worst of conditions on a daily basis.

In the evening I drove around the Port Oneida Rural Historic District, a community northeast of Glen Haven that includes 16 historic farms. Several of the barn photographs that appeared in the earlier “Farm Country” post were taken here, including D.H. Day’s elaborate white barn. I wandered down a dirt and gravel road for a long time, and had to wonder why I did, after nearly getting stuck on a sandy hill. Then, when I reached a pull-out at the side of the road, it all became clear. 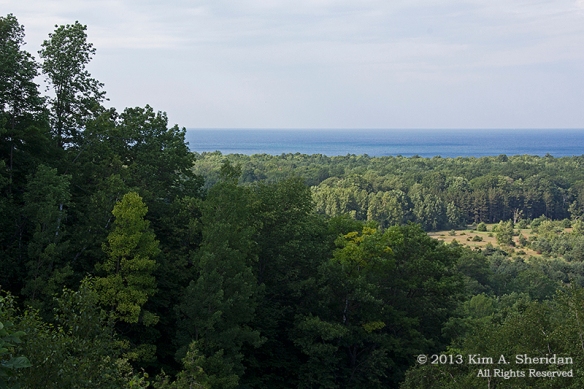 Deep green trees, crystalline blue water: this is what I remember when I think of Michigan.