Have you ever noticed something for the first time, and after that you see it everywhere? For me, this was the summer of the Fiddler Crab. Why I’d never noticed them before escapes me, but after my first encounter with a few at the Wetlands Institute in Stone Harbor, I saw them just about everywhere I went. Usually in large numbers!

Fiddler crabs are small crabs that live in salt-water and brackish water marshes, beaches and mudflats. They are colonial and social critters that are active during the day.

The male crabs are particularly odd-looking because one of their front claws is grossly enlarged. It’s used to court females and engage in ritualized combat with other males. In tai chi, we have a move that looks just like this!

FUN FACT: Fiddler crabs molt their shells as they grow. If a male loses his large claw, he will grow a new one during the next molt, on the opposite side of his body. The movements of his small claw against the large one resemble someone playing a fiddle, hence the name.

Fiddlers eat by scooping up mud or sand (left), removing algae and other organic material, and then returning the mud in the form of a pellet (right). Females like this one rapidly alternate between both claws as they feed. A male crab’s large claw is useless to eat with, so he has to eat one-handed.

Here is a fiddler crab near her burrow, with sand pellets to the side. They dig their burrows one pellet at a time, carrying it under their body as much as five feet away before returning to fetch another pellet. These burrows can be as deep as two feet! That’s a lot of work for an inch long crab.

The marsh bank below this Semipalmated Sandpiper is riddled with crab holes. The burrows are important shelters from not only predators, but the daily ebb and flow of the tides. Fiddler crabs have biological clocks synchronized to the tides, and retreat to the burrows when high tide approaches, plugging the entrance with mud. 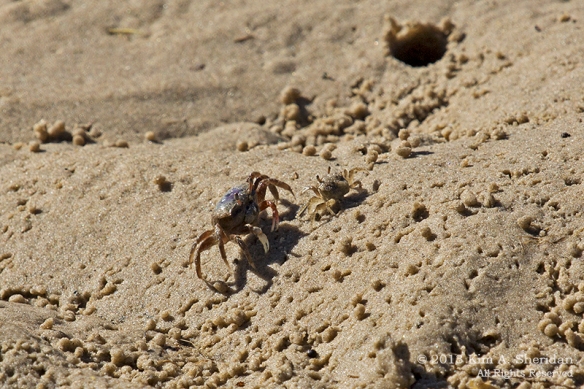 The smaller crab here approached this larger female very tentatively, and then tried to scurry past her. Only to have the large female scurry right alongside. They moved in parallel like that for quite some way. Was this a territorial dispute? Is the small crab a juvenile? Some of life’s little mysteries we’ll never solve!

It’s a big world out there for a little crab. They have a lot of predators. Threats can come from larger crabs like the marsh crab, diamondback terrapins, and even mink and raccoons. Then there are the dangerous birds, like Great and Snowy Egrets, Great Blue Herons, terns, and gulls.

Sometimes the crab fights back. I’m not sure who’s captured who! 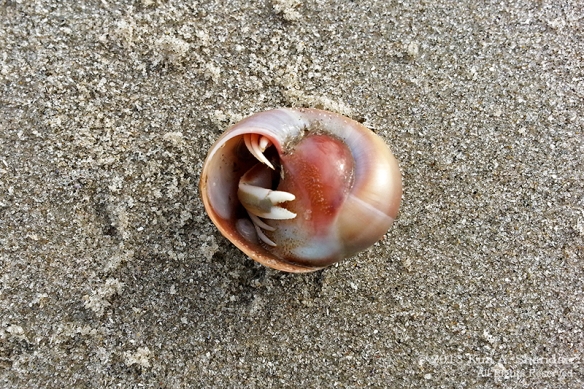 Here’s a different sort of crab – a flat-clawed hermit crab. Hermit crabs are soft-bodied, and must find someone else’s shell to live in, typically abandoned sea snail shells. I collect a type of moon shell known as a shark’s eye. Usually they’re empty, but I was delighted to find someone at home in this one! I couldn’t coax him out to play, though. Hermits are usually nocturnal, so probably he’d have rather been napping. (It makes me cringe to admit it, but these are cell phone photos. It was all I had with me at the time.)

FUN FACT: Hermit crabs need to replace their shells as they outgrow them. Crabs like to shop for new shells, trying various ones on for size. Sometimes this leads to fights, or a number of crabs ganging up on one whose home they covet. Sometimes they form a “vacancy chain”. A new shell in the neighborhood will draw a crowd of hermit crabs. The largest crab in the group will move into it, leaving his shell behind. That will be taken by the next largest crab, leaving his shell to the third largest, and so on down the line! 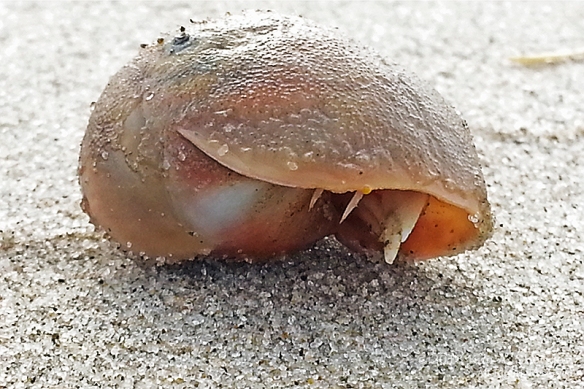 Take time to look at the little things in life. You never know what you might find!

Coming up: Looking for Fall