Seafaring is a dangerous business. Be they sail or steam, passenger or cargo, many ships have gone down along the Atlantic Coast over the centuries. Powerful storms and strong, tricky currents make navigating harbors a challenge that in darkness is nigh unto impossible.

Which is why man made lighthouses.

Towers topped with bright lights visible for miles dot the coasts and Great Lakes of North America. Sandy Hook Light has guarded the southern entrance to New York Harbor since before the American Revolution. In 1828, help arrived: the Navesink Highlands Light Station, otherwise known as the Twin Lights. 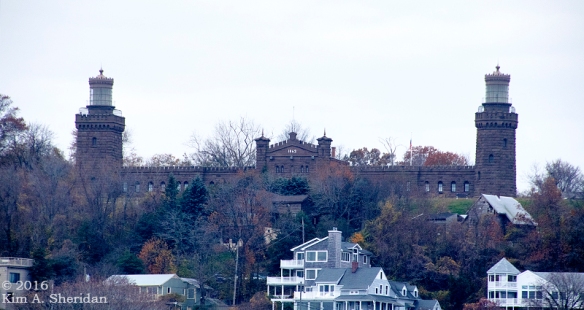 The name says it all – there are TWO lights to this light station. Rebuilt of local brownstone in 1862, the towers are linked by keeper’s quarters. They stand 64 feet high atop a 200’ hill overlooking the Shrewsbury River. 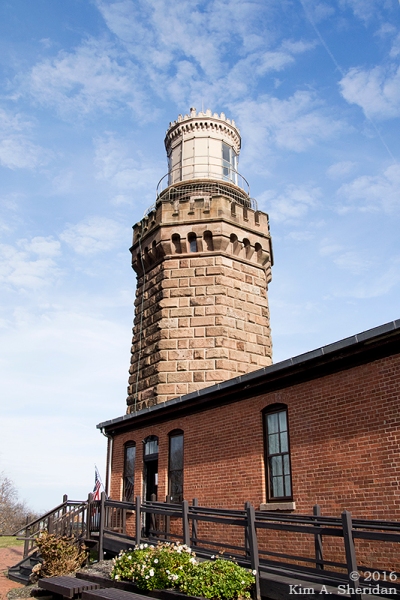 The two towers are different shapes, the North being octagonal and the South square.

At night, the two beacons, one fixed and one flashing, were easy to distinguish from the light at Sandy Hook.

They were also easy to see. The Twin Lights were the first in America to use the revolutionary Fresnel lens design, when two of these beehive shaped lights were installed in 1841.

The South Tower’s beehive light was replaced in 1898 with an electric-arc bivalve lens. This light could be seen 22 miles out to sea, the brightest light in the U.S. at the time. It was so bright the North Tower light was taken out of service. 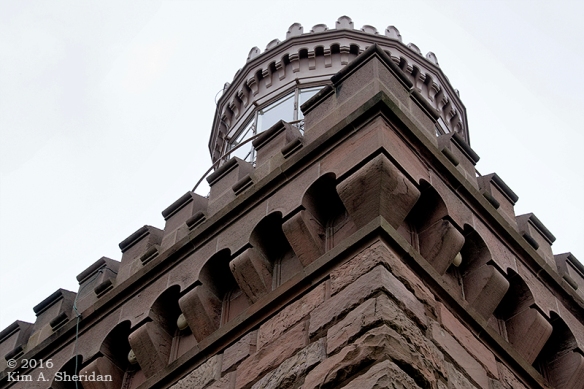 In 1941 Navesink Light Station was decommissioned and extinguished.

The 9’ bivalve lens needed its own generator to power it. Today that lens is on display in the Electric Power Station building.

Close up of the bivalve light.

The front of the building that connects the two lights. The battlements along the roof and the towers at each end give the Twin Lights a fortress-like feel. 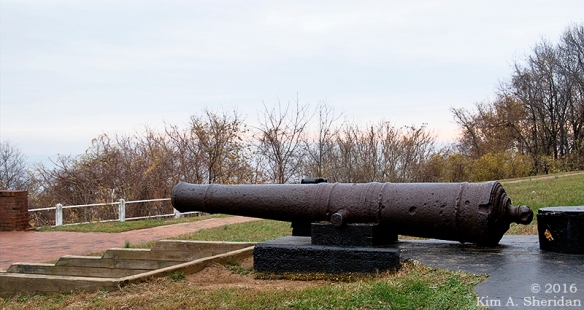 The cannon adds to the ambience. On clear days the New York skyline is visible from the Twin Lights site. So is the Statue of Liberty, according to Robb.

The view from the top of the North Tower. 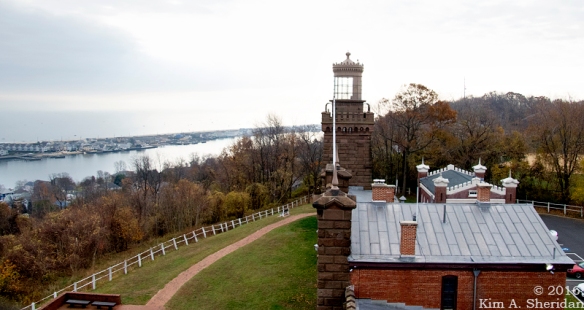 The South Tower and the Shrewsbury River.

Looking across to Sandy Hook. The first demonstration of Marconi’s wireless telegraph took place here in 1899, at the America’s Cup yacht races off Sandy Hook.

Now a National Historic Landmark, this life-saving light station reminds us of the years it stood watch over the harbor, its beacons a comfort to all who passed. 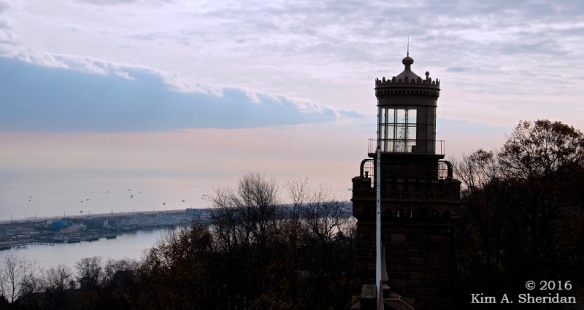 The Twin Lights of Navesink.