I have yet to take a trip where I got enough of the place in one visit, where I didn’t immediately want to go back. For many places, like the Smoky Mountains and the Adirondacks, once may have to be enough. Other locales, a little closer to home, can be visited again and again.

Like Blackwater Falls State Park. You may recall the last trip my friends and I took to the Potomac Highlands region three summers ago. Seneca Rocks & Cavern. Lindy Point. Dolly Sods.

The list of things we didn’t see during that trip was even longer: Spruce Knob. Cathedral State Park. Canaan Valley NWR. Bears. More of Dolly Sods. (One can never get enough of Dolly Sods.)

Clearly, a return trip was in order. And so, on Labor Day weekend 2018, we went home to the mountains of the West Virginia.

Never accuse us of saving the best for last – no sir, we start right at the top. We reached the pinnacle of our trip the very first morning – Spruce Knob, in the Spruce Knob – Seneca Rocks National Recreation Area in Monongahela National Forest. Almost Heaven? The highest point in the state at 4,863’, Spruce Knob is as close to heaven as you can get in West Virginia.

And we walked ALL the way to the top… No! There’s a nice cushy road that leads to a parking lot at the summit. Atop the mountain, the half-mile Whispering Spruce Trail loops out to the southern tip of the ridge and back, passing several overlooks along the way.

Overlooks! Wide-open vistas of endless mountains to photograph. Just what I was looking for! So often I turn my lens on the small things in Nature. Landscape photography is a mystery that I was eager to figure out on Spruce Knob.

So what did we do first on arrival at the summit? Get totally distracted by tiny little plants.

Before we even reached the trail head we were marveling over the ferns and lycophytes near the parking lot. This is Lycopodium clavatum or running ground-pine. It’s a lycophyte in the club moss family. Club mosses are not mosses at all, but low-growing spore-producing evergreen plants.

Here’s the spore-producing strobili of the plant above. The club moss family has been a favorite of ours for years. Recently I’ve come to realize that everything I thought I knew about them was wrong.

When we first started learning about lycophytes, or club mosses, we identified them all as L. dendroideum or L. annotinum, based on whether they had multiple branches like a Christmas tree, or just one. We knew of a few other species, but rarely considered them.

That changed when Robb started studying more about the plants and learned to identify a few other species. Turns out we hadn’t even been getting the genus name right for some of them. 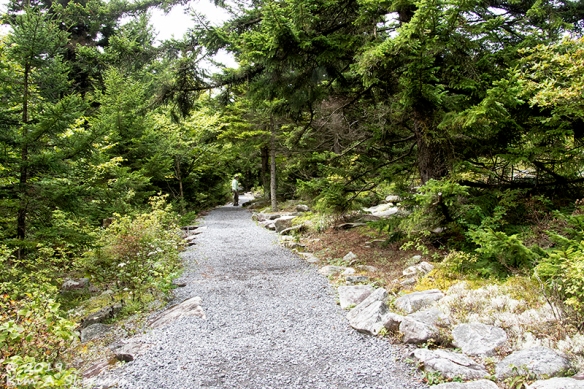 Finally! Back to business. We were on the trail, in search of lovely West Virginia vistas. Always cautious, Robb was looking for bears. Er… maybe not. Ferns, perhaps.

The forest on the Spruce Knob summit is dominated by Red Spruce, Picea rubens. It’s very common at high altitudes in West Virginia. Underneath is a lush understory of heath shrubs like blueberry and huckleberry, ferns and mosses.

Maybe there’s a view around this bend…

Nope. There was a nice jumble of rocks, though. Look closely at the variety of lichens covering the rocks, and the bushy reindeer lichen behind them.

A little farther down the trail we came to the true summit and the observation tower that sits there. At last, a view! Mountain ridges for as far as the eye could see.

Spruce Knob is the highest point in the Allegheny Mountains, and lies on or just south of the Allegheny Front, depending on who you are talking to. The Front is a dramatic escarpment that marks the transition from the steep Appalachian Ridge and Valley Province to the east and the more gently sloped Appalachian Plateau to the west.

Back on the trail, we soon came upon an interesting rock perfect for the official “Photo of the Day.” Robb and Don, trees, mountains and clouds. 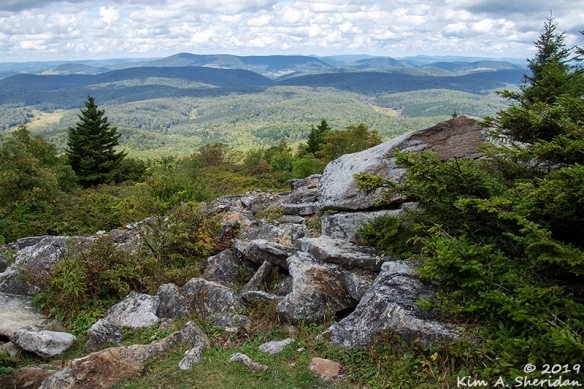 Another jumble of rocks caught my eye. The bedrock here at the summit has the mellifluous name of “Pottsville conglomerate.” Conglomerate is what it sounds like – a glom of rounded gravel sediments, cemented together, by silica in this case. There’s sandstone here, too, a similar sedimentary rock, made up of smaller, sand-sized particles.

All the standard landscape image elements are in this photo: Foreground: rocks. Mid-ground: trees. Background: ridges and clouds. See? Not so hard. 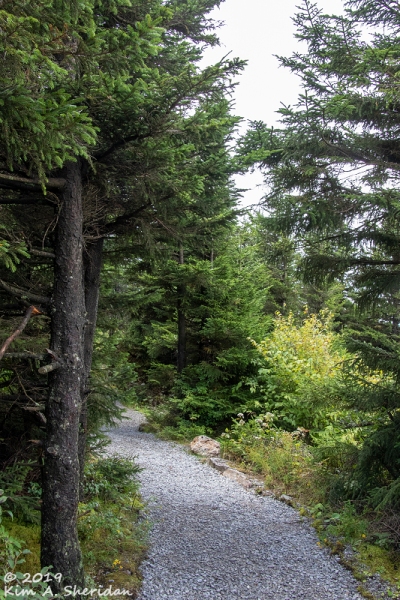 Onward through the forest, never knowing what delight might await around the bend. 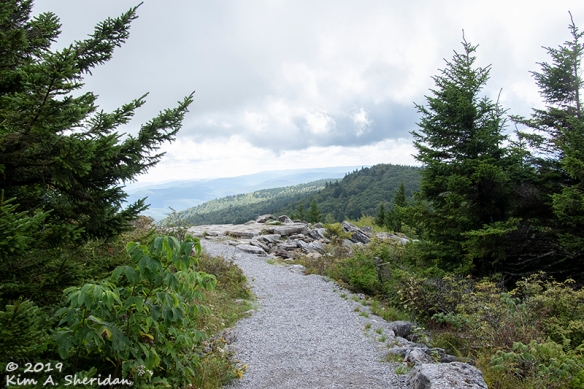 Sometimes, the forested trail IS the delight around the bend.

Just beyond, a tantalizing preview…

… To a windswept panorama.

I dubbed this flat wide-open rocky terrace “the Patio” since it looked just like a backyard patio. We stood at the southern tip of the Spruce Mountain ridge. (Click the photo for a full-sized image.)

Like most of the open vistas we found on the Whispering Spruce Trail, the views here are toward the west and southwest, toward the Allegheny Plateau.

Slabs of rock were stacked like books on a library shelf.

Dramatic clouds piled up over the ridges beyond.

A close up of the valley below, looking slightly east of south. Small farms and pastures dotted the folded landscape.

Grandma Gretl took a break from her intense study of the sizable fragments, or clasts, embedded in the conglomerate boulder on which she stood. Dramatic views, pish-posh! Her attention was on the deep spruce forest behind the photographer’s shoulder. Or maybe she’s just scared of heights. She does seem to find herself perched in some precarious places. 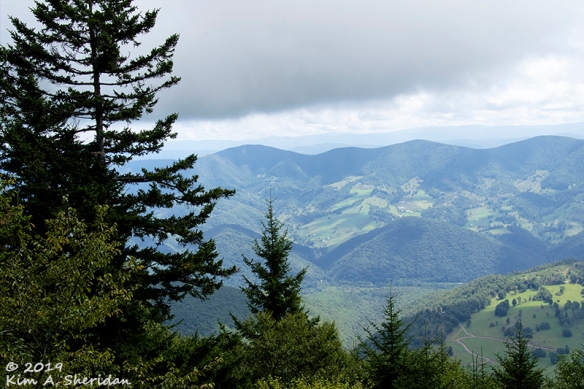 On the far side of the loop, we came to a viewing platform perched over a steep drop. The land dropped off much more sharply on this side of the Allegheny Front. Looking southeast, we could see meadows and pastures in the foreground. Behind that, a river, another knob and then more mountain ridges.

Streams and rivers on the west side of the Allegheny Front drain toward the Mississippi River; on the east, toward the Atlantic Ocean. Would you believe that Spruce Knob is a part of the Chesapeake Bay Watershed? It is! That barely-visible river is the North Fork of the South Branch of the Potomac, which flows hundreds of miles into the Chesapeake Bay.

The view toward the east and the Appalachian Mountains was dramatic. Alas, overlooks were few and far between on the east side of the loop, and we soon came to the end of the trail.

Reluctantly, oh so reluctantly, we left the beautiful vistas of the Whispering Spruce Trail, for more adventures awaited down the country roads of West Virginia…

2 thoughts on “Almost Heaven: A Spruce Knob Point of View”