Once upon a time, there was a handsome frog. He sat upon the edge of a pond, waiting. But not for the kiss of a human lassie to change him into a human prince, for he was happy and proud to be a bullfrog. So proud that he soon burst into robust song. His skillful bellowing quickly drew a pretty female frog to him. All around him that spring, frogs and toads were staging similar little romantic dramas in ponds and bogs throughout the land.

Not long after, little clumps of clear jelly filled with dark spots began to appear. Eggs! Thousands of them. This is the frogspawn of the wood frog, and the tadpoles-to-be are already visible.

Toads lay their eggs not in round masses, but long strings. When the tadpoles emerge, they will consume the gelatinous casing for the nutrients it holds.

In spring and early summer, tadpoles are everywhere, swimming above the leaves left behind the prior fall…

And just doing what tadpoles do, eating and growing. Tadpoles are exclusively aquatic, and breathe through gills like fish. Dinner is algae and water plants. The length of time frogs and toads spend in the tadpole stage varies according to the species; in bullfrogs it may be up to two years. Eventually tadpoles begin the amazing transformation from aquatic larvae to terrestrial adult. Legs appear, and then arms. Their bodies change shape, the tail shortens, and gills are replaced by lungs. 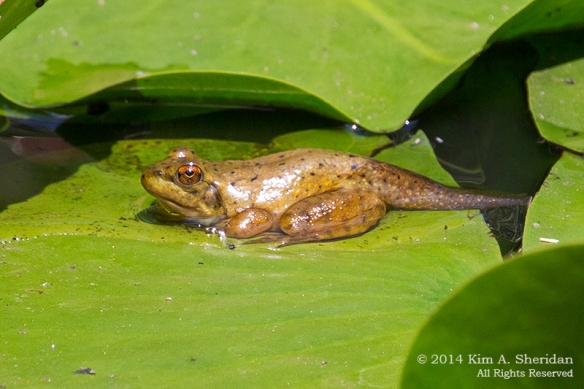 Behold the froglet. Not yet fully mature, but no longer a tadpole, this youngster can breathe air and move about on land. He’s still got that tail, though.

Young bullfrog, finding shade from the hot August sun in the lily pads. The tail has been absorbed into his body, and he’s fully mature, but he will continue to grow in size. Adult bullfrogs rest during the day, and hunt at night. Anything they can catch becomes prey – insects, fish, birds, even small mammals.

The small pond is home to a surprisingly tame group of young bullfrogs. The presence of humans with cameras doesn’t seem to bother them much. Bullfrogs will remain near water much of the time, as they must keep their skin moist. 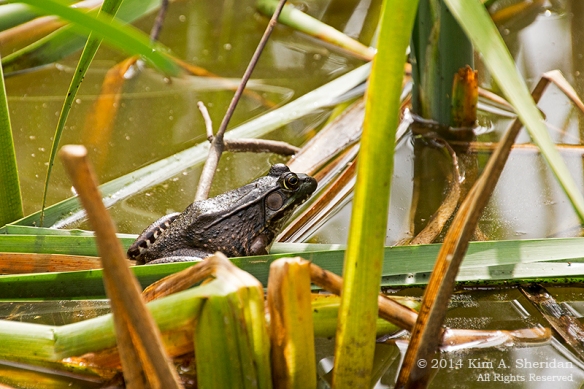 Another pond finds a green frog amidst the cattails. Green frogs are also primarily aquatic. See the ridges running along the frog’s back? That’s the best way to tell green frogs from bullfrogs; the latter lack these dorsolateral ridges.

FUN FACT: The roundish circle behind the frog’s eye is the tympanum, an external “ear” of sorts. It transmits sound to the frog’s inner ear. In females, the tympanum is about the same size as the eye; in males it’s twice as big. An easy way to tell the boys from the girls! 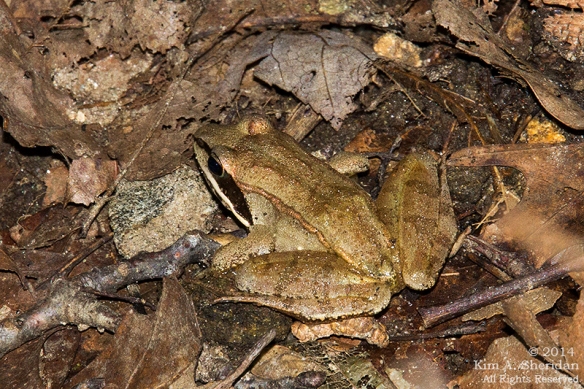 A wood frog sports a robber’s mask as he lingers on the leaves scattered across the forest floor. Wood frogs live in low moist woodlands and forested swamps. In the winter they migrate to nearby uplands, returning in the spring to the vernal pools, to search out a mate and begin the cycle anew. 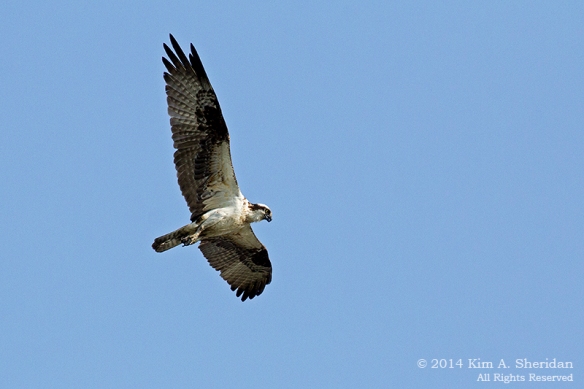 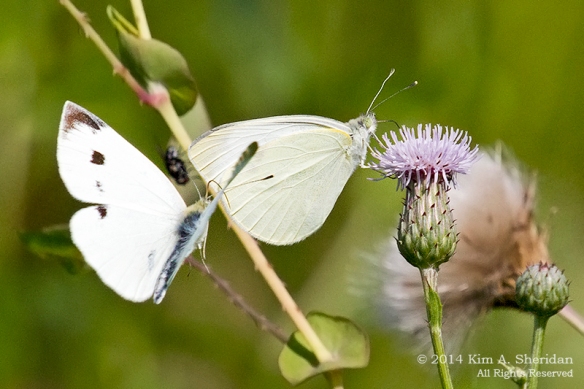 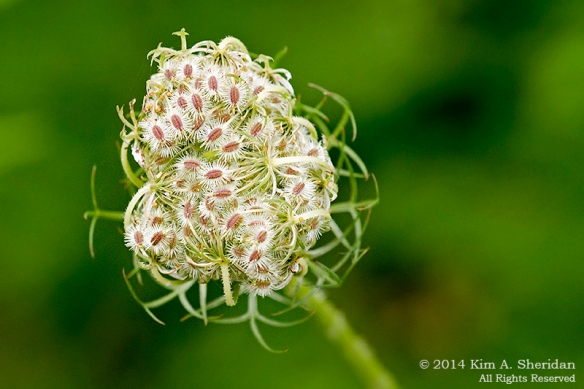 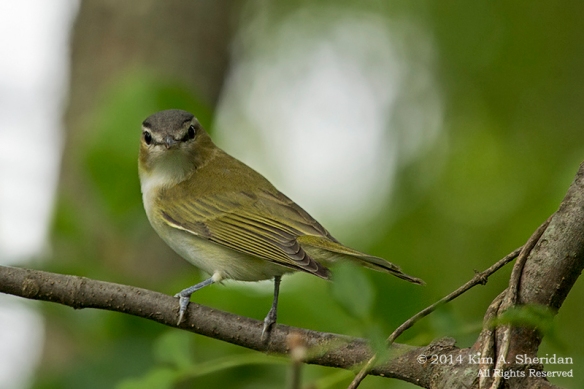 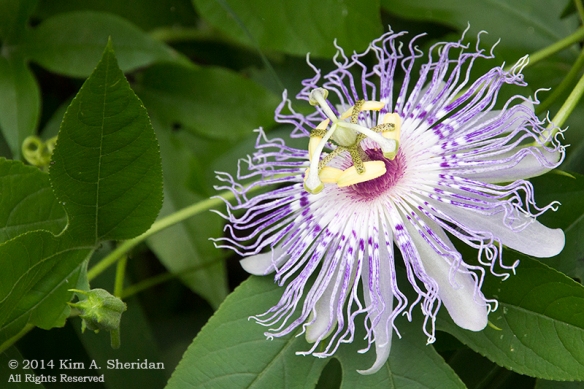 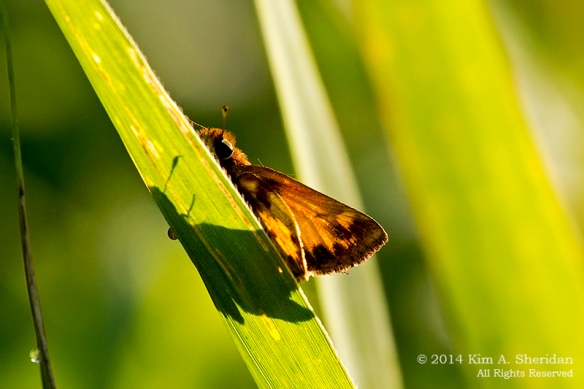 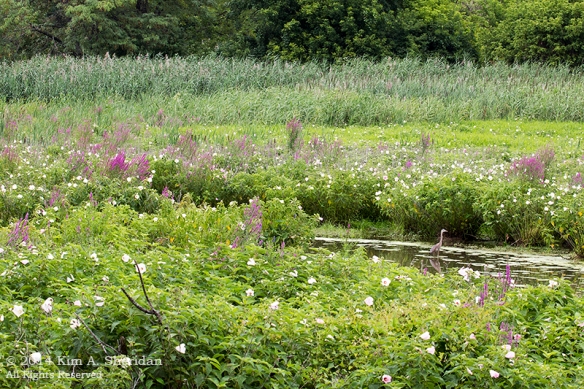 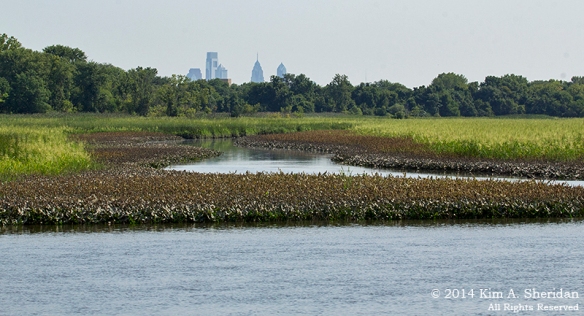 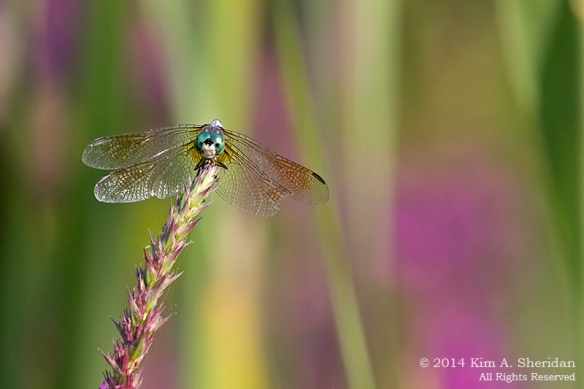