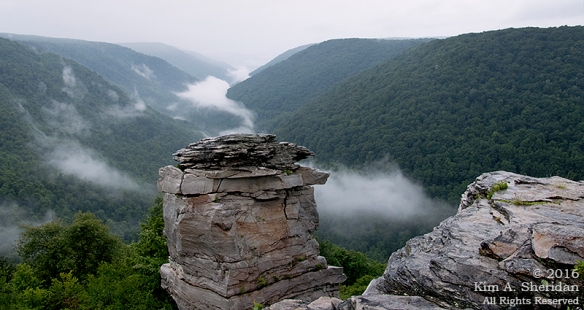 If it’s the Appalachians, it must be raining.

Like July Fourth last year, and the Appalachian Spring Expedition before it, Independence Day in the mountains of West Virginia was a wet one. The rain started at breakfast, and though light, continued for much of the day. 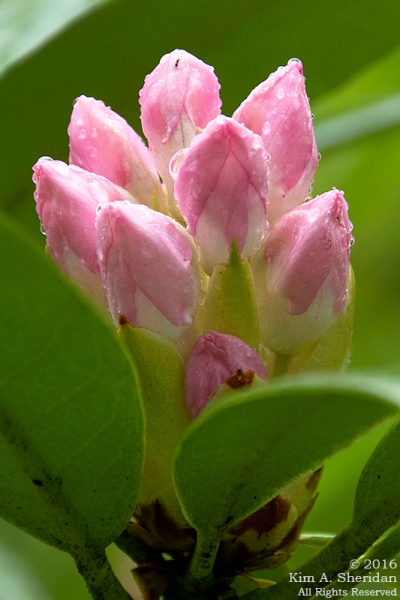 With precipitation in our future, the three of us had decided a day spent in and around our home base of Blackwater Falls State Park was in order. So we broke out our dancin’ shoes and Lindy hopped out to Lindy Point.

The short trail wound through woods dense with rhododendron. Sometimes there is beauty to be found in the rain. 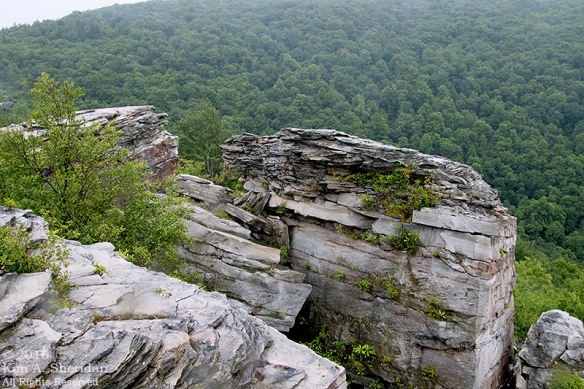 The trail ended at a rocky outcropping, a once-proud craggy castle clinging to a precipice overlooking the Blackwater River Gorge. A two-tiered observation deck awaited us there. Mostly we ignored it in favor of ducking through curtains of greenery to stony alcoves open to the leaden sky. The rock formations and the view drew my complete attention… 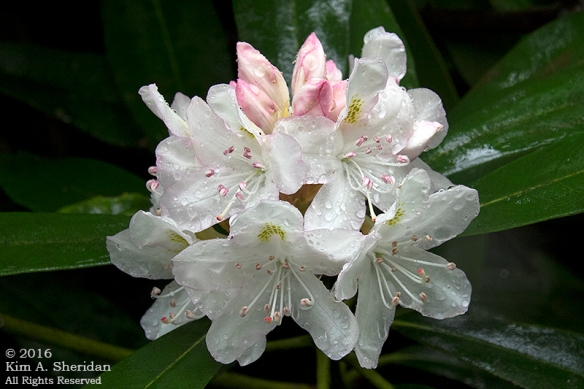 When I wasn’t distracted by the rhododendron blooms. 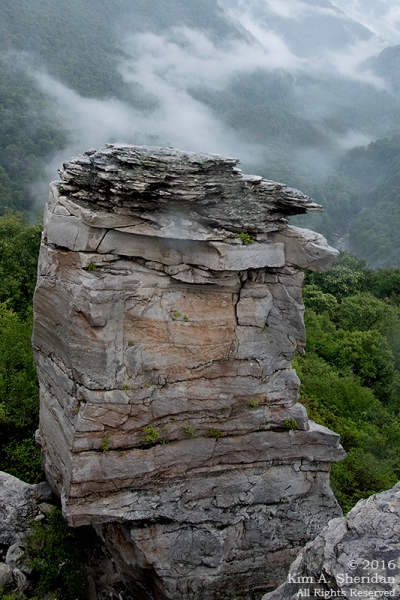 A lone turret stood guard over the castle walls.

Made of sandstone and shale, like most of the rock in Blackwater Falls, the tower shows the effects of differential weathering.

Please pardon the raindrop blurs. It was raining faster than I could dry the lens. 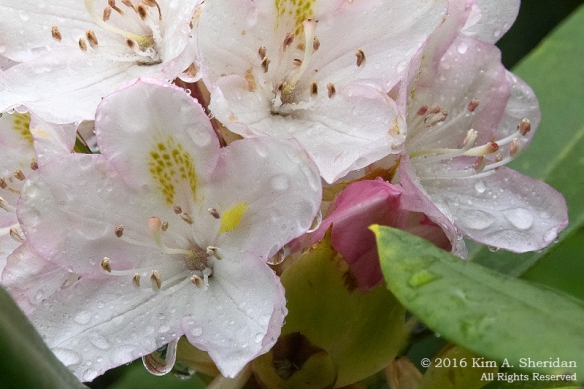 Raindrops on rhodies… these are a few of my favorite things. 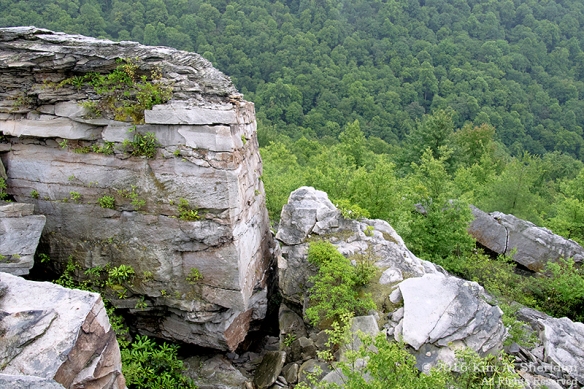 Don’t lean too far over the edge!

Don and Robb posed for the obligatory portrait on the observation deck. That didn’t satisfy the photographer. Too dull, too… common. Taskmistress that she is, she insisted that they walk around the railing and out onto the rocks, dance from side to side until they were placed just so, and then kneel before Her Majesty. 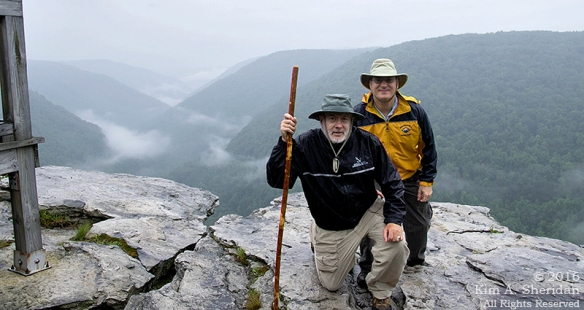 The Mage and his staff, and the Wise Fool, on the Castle Lindy parapet. 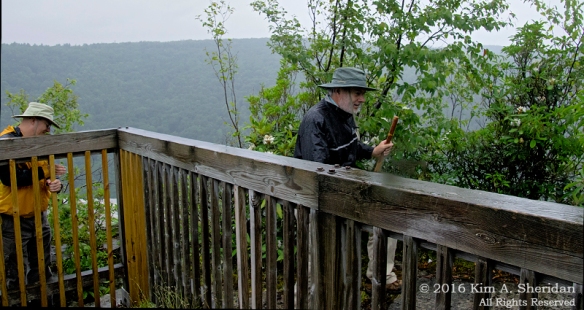 Luckily for her attendants, they did not displease Her Majesty. In her boundless generosity, she allowed them to return to the safety of the dance floor, er, observation deck.

The tomfoolery continued in the afternoon. Every day, we traveled from our cabin to the Lodge several times. Every time, we passed a certain sign. Every time, I cried out, “Look! There’s a petting zoo!”

This seemed as good a day as any to drop in on the furry residents of the zoo. Chickens, piglets, rabbits, a donkey, a goat and more were tucked into a cozy barn. 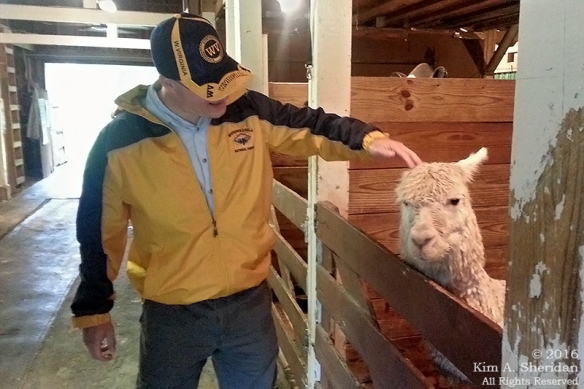 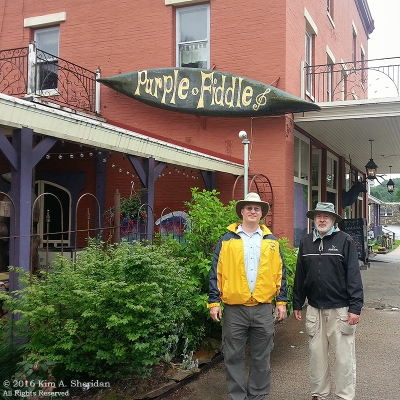 From farm to town, the  whirlwind went on, to the little hamlets of Davis and Thomas. Davis offered a neat artisans’ shop full of local crafts.

Thomas had an opera house, antique shops, and the Purple Fiddle, a local watering hole renowned for its eclectic roster of musical performers. (cellphone image)

Thus another fine day in West Virginia drew to a close, with our merry band snug in our cabin while the rain beat a tattoo on the roof.

Others may have their parades, barbecues and fireworks on Independence Day. Not us. For my companions and I, a day of raindrops, moptops and the Lindy Hop was the perfect recipe for a West Virginia Fourth of July. 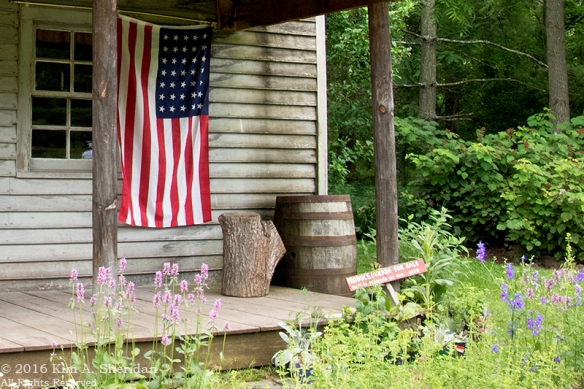 All contents of this blog
Copyright Kim A. Sheridan
All rights reserved
Want to use an image?
kimsheri@verizon.net